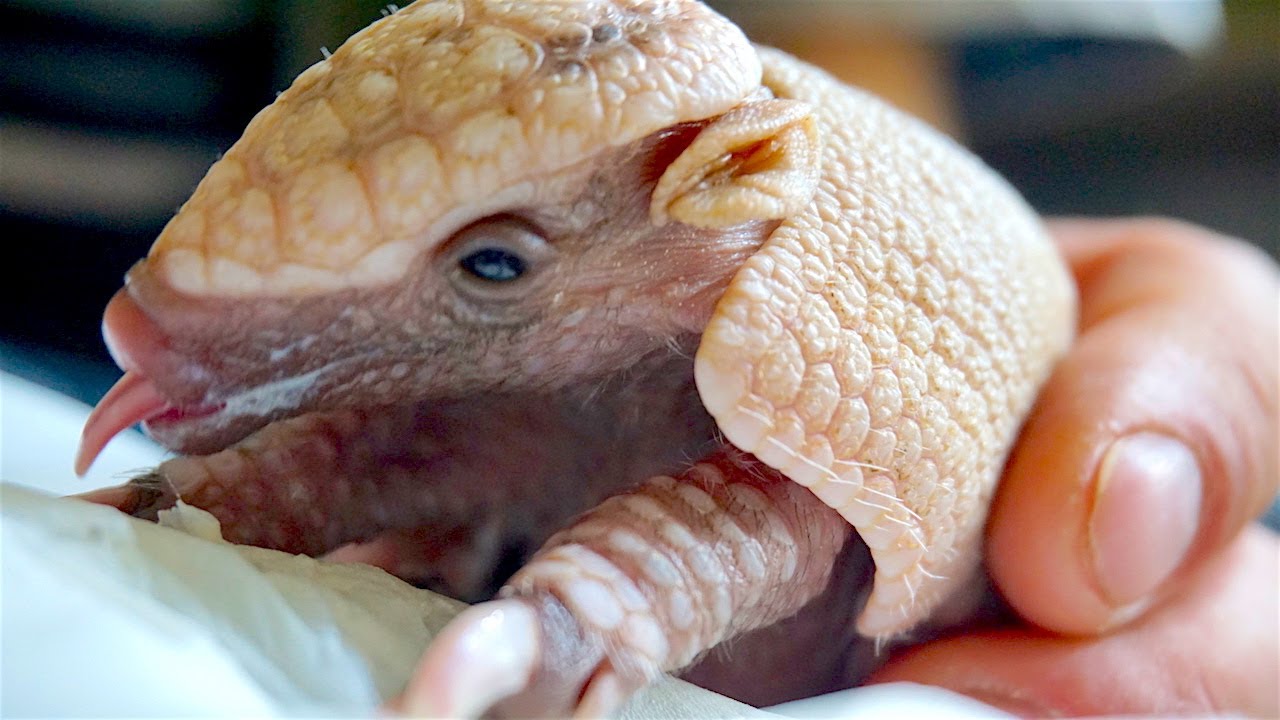 Armadillos are mammals that are known for their external layer of skin resembling a body armor. These magnificent mammals have always been a matter of interest for biologists because of the many unique features they have. For instance, an Armadillo is one of the 4 mammals that lay eggs.

That being said, the most striking thing about armadillo babies is the fact that the adults always give birth to identical quadruples. This means that all the babies born in a litter will have the same gender.

There are dozens of such interesting things about baby armadillos that most people do not know. This is why we have compiled a list of Baby armadillo photos, videos & facts in this article that our readers might have never known.

Armadillos do not lay eggs

Though armadillos have an unearthly appearance, they still are mammals and they give birth to their young.

The striking factor when it comes to armadillos is that they always give birth to identical quadruples and they always have the same gender.

Armadillos giving birth to identical quadruples have been a matter of interest for most biologists and they did a lot of research trying to debunk the mystery. It was found out that all the armadillo babies are born from a single fertilized egg and not from different eggs as that in the case of other mammals.

These fertilized eggs always break into four identical zygotes which yield quadruplets. Scientists haven’t yet clearly identified as to why this happens. And there have been two schools of thought regarding this.

A group of biologists says that this is done in order to avoid the risk of interbreeding among siblings. Whereas, some say that this might be due to an evolutionary quirk that somehow got into the genes of female armadillos! 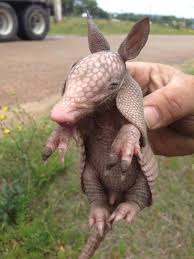 Sounds quite difficult to believe huh? But yeah, armadillo babies are called pups.

In fact, the closest relatives to an armadillo would be sloth & anteaters.

Armadillo babies are born after a gestation period of 2 to 5 months depending upon the species. Irrespective of the species, all the newborn babies are helpless and are depended on their mother for survival.

They survive on their mother’s milk for the first 2 to three months. When compared to the other mammals, armadillo pups mature quickly and are weaned before they are 4 months old.

These pups get sexually matured within 12 months after birth and then they leave their mother in search of a mate.

Armadillos reproduce sexually and they always give birth to identical quadruples 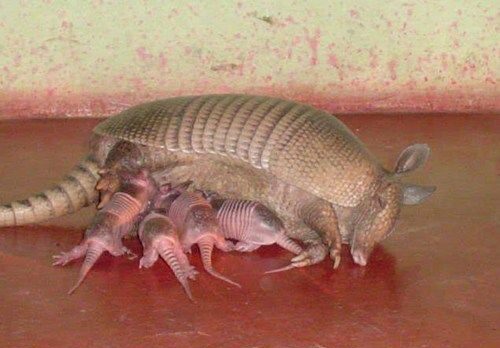 Armadillos are solitary mammals that reproduce sexually and give birth to their offspring. Being solitary mammals the reproductive cycle starts when the female identifies a potential mate and the males successfully fertilizing her eggs.

After a successful mate, the male leaves the female and then the female takes care of everything on her own.

Armadillos usually have a gestation period of 2 to 5 months depending upon the species. These eggs are fertilized inside the mother’s womb and they all share a common placenta.

By the end of the gestation period, the mothers will usually burrow a birthing burrow that is almost 15ft wide. It is inside this burrow she gives birth to the young. 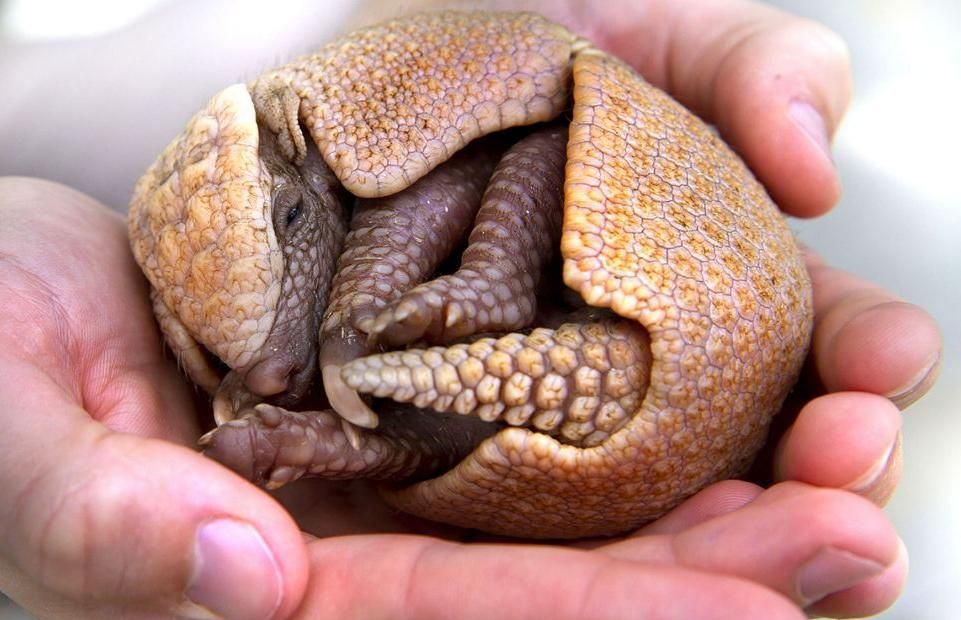 Diet of an armadillo baby in the wild differs greatly from that in captivity. Armadillo babies, in general, are born blind and are completely dependent on their mothers for survival.

For the first 2 months after birth, the babies survive on their mother’s milk. These babies are weaned by their mothers at most by the end of 4 months.

By the time they are weaned, they would have grown the protective armor around them and would be healthy enough to forage.

Being omnivorous animals their diet mainly comprises insects & larvae but they also eat roots of some plants.

This isn’t the case with orphaned armadillo babies that are born in shelters or captivity. For the first 2 to 3 months they are fed kitten formula with an eyedropper.

Feeding a baby armadillo in captivity isn’t as easy as you would imagine it to be. These babies can often times overeat which can lead to severe health issues. Once the babies are old and healthy enough, they are also fed the common pet food in limited quantities.

Now that we have discussed some interesting facts about armadillos, let us have a look at some of the frequently asked questions about them.

In a study conducted on the Armadillos in Texas & Louisiana, USA it was found out that 1 out of every 6 armadillos carried the Mycobacterium Leprae.

Armadillos are known for their low body temperatures which makes it an ideal breeding ground for leprosy causing bacterias.

The bacteria are generally transferred to other animals or humans by physical contact or through the consumption of armadillo meat.

As said in the previous section, armadillo babies are completely dependent on their parents for survival for the first 2 months after birth. This means that the babies will for sure have physical contact with the adults, causing bacterial transmission.

It is for this reason why you need to be extremely careful while handling an Armadillo. If you were to touch an armadillo or its baby, it is always advised to use a glove.

Do baby armadillos have teeth?

No baby armadillos do not have teeth at the time of their birth. These babies are born blind and they lack teeth, it is for these reasons they are dependent on their adults for survival.

The babies start growing teeth within days after their birth and will have completely developed teeth before they are weaned.

An adult armadillo has around 100 teeth but they aren’t divided into molars & premolars as in the case of other mammals. Apart from that, they also lack incisors and enamel on teeth.

Can I keep a baby armadillo as a pet? 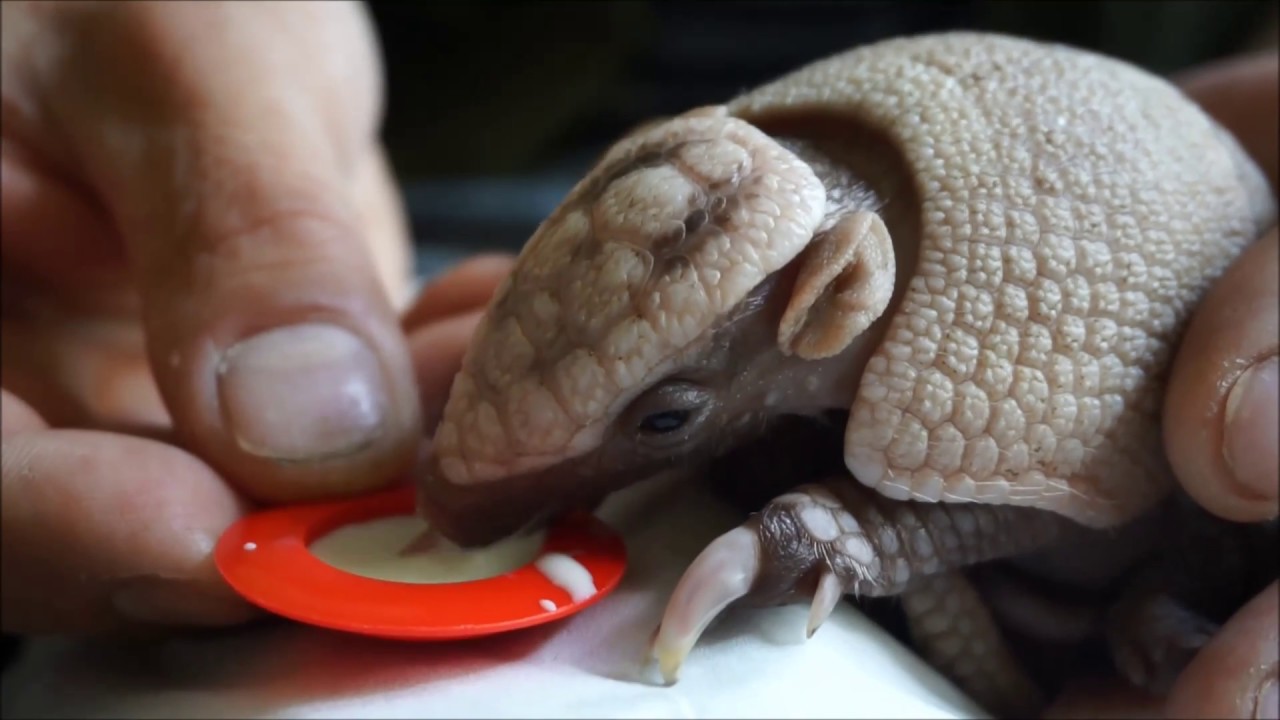 You cannot keep a baby armadillo as a pet unless you have a license. Though these magnificent animals are commonly found in America, you cannot just go and get one as a pet.

Though armadillos may look cute, they are wild animals and hence they would only thrive in a wild habitat. Armadillos have been on this planet for millions of years and they are primitive animals contrary to their appearance. For them, all humans are a threat and they don’t distinguish between any.

Apart from all these, it isn’t easy to take care of a baby armadillo in captivity. Feeding them properly is going to be one big headache.

The baby armadillos are given kitten formula and are fed using a dropper. These babies will drink as much as you give them because they don’t know when to stop. Excessive feeding can lead to severe health issues and even death.

Last but not the least, armadillos are common carriers of leprosy and you don’t want a leprosy carrier anywhere inside your house!

Yes, baby armadillos do nurse. As said in the previous sections, baby armadillos are born blind and are virtually helpless. The babies are dependent on their mothers for survival for at least the first two months after birth.

Armadillos start digging a birth burrow towards the end of their gestation period and the babies are nursed in these burrows. Depending upon the species of Armadillos they can be weaned anywhere between 2 to 4 months.

Until they are weaned, they spend most of the time in their burrows.

Do baby armadillos have shells?

This shell begins hardening within days after its birth. By the time these babies are weaned, they will have a fully developed shell like the adults.