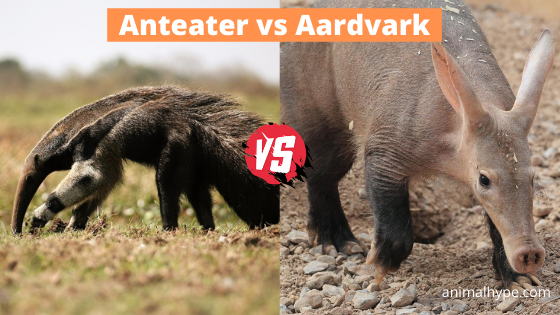 All of us know of Anteaters, but how many of you have heard of Aardvark? Apparently, not that many. Aardvarks are also a species of insectivorous animals, just like the Giant Anteaters. However, due to the exclusive lifestyle they lead, not many of us have seen or even know of them.

There have been instances when Anteaters and Aardvarks have been confused for each other due to the slight likeliness of their appearances. However, upon close examination, you can find out that these two are much different from each other.

Do you want to learn how to differentiate between an Anteater and an Aardvark? In this article, we will discuss all the distinctions between them so that you can easily recognize them when you come across one the next time.

Differences between Giant Anteater and Aardvark

Giant Anteaters are also referred to as “Ant Bears” in many regions of the world. Native to Central and South America, these insectivores, along with three other siblings (Silky Anteater, Northern, and Southern Tamandua), belong to Anteaters’ species.

However, out of all four, only Giant Anteaters have survived the test of time and are still seen today. As their name suggests, these Anteaters are also the largest members of their family.

Aardvarks are the burrowing insectivorous animals who are also called “African Ant Bear” because of their nativity to Africa. Like the Giant Anteaters, Aardvarks are also the sole extant members of their order Tubulidentata. Aardvarks are strictly Afrotheres and are distributed across the African subcontinent.

Although most people believe Aardvarks to be closely related to the family of Giant Anteaters, the truth is quite the opposite.

Any similarities between the two insectivores are limited to superficiality. In the table given below, spot the difference between their order, family, nature, and physical characteristics. We will discuss these in-depth in the sections that follow.

How were Giant Anteaters and Aardvarks named?

The Giant Anteaters, along with other Anteaters, belong to the suborder of Vermilingua, which roughly translates to “worm tongue”, meaning animals who eat worms such as ants and termites.

While “anteater” simply means one who eat ants, “giant” is attached to it due to their large size. Giant Anteaters are also called “Ant Bears” in certain areas.

The name “aardvark” is from the Afrikaans language, which can be traced back to “erdvark” which means “ground pig” or “earth pig”.

However, despite the name, Aardvarks have no relation to pigs. They have also been named “Cape Anteaters” after the Cape of Good Hope in South Africa. Their order, Tubulidentata, is based on their tubule-style teeth.

You can easily recognize a Giant Anteater even from a fair distance due to their large size. They have a hairy body with grey fur that starts getting denser as well as darker in shade towards the tail. On the other hand, the body of Aardvarks is somewhat pig-like in appearance.

Aardvarks have an arched back, and you can see coarse hair grown all over their bodies. Their prominently arched backs are one of the defining distinction between both the insectivores.

The head of the Giant Anteater is particularly elongated in comparison to other Anteaters as well and measures up to 30 cm in length. Their snout takes up most of the head. It is long and tubular in structure and has an opening for mouth and nostrils at its base.

The Aardvark’s head has a long snout as well, although it is shorter than that of the Giant Anteater. At the end of the snout is a disc where the nostrils are located, with the mouth in the underside of the snout.

While the Giant Anteaters are toothless, the Aardvark’s teeth are quite remarkable. In place of the pulp cavity, their teeth have hexagonal tubes of vasodentin with separate pulp canals for each tooth kept in place by cementum.

Unlike our teeth, the teeth of Aardvarks lack the enamel coating and therefore regrow continuously. When an Aardvark is born, it has canines and incisors towards the front of the jaw. However, as they grow up, these teeth fall out and do not regrow. Therefore, an adult Aardvark has cheek teeth at the back of their jaw.

Both Giant Anteaters, as well as Aardvarks, have a great sense of smell. The Giant Anteater can smell 40 times better than an average human being. On the other hand, Aardvarks have nine olfactory bulbs, which is more than any other mammal.

While both Giant Anteater and Aardvark have a similar body length, the mass distribution is different in each. Giant Anteaters have a long, bushy tail that about 30 cm longer than Aardvark’s muscular tail.

This means than Aardvarks have a bigger body than that of the hairy Giant Anteater. There is a significant difference in their body weights as well. While the Giant Anteater weighs up to 20-45 kgs, Aardvarks weigh more than 60 kgs.

Both the male and female Aardvarks weigh the same; the male Giant Anteaters are 20% heavier than their female counterparts.

What and how do Giant Anteaters and Aardvarks eat?

The staple food of both Giant Anteaters as well as Aardvark is ant and termites. However, due to the difference in their mouth cavity, both of them eat differently.

Due to the absence of teeth and limited jaw movement, the Giant Anteaters swallow their food instead of chewing it. They have a long tongue on which they rely for catching their food. It can stretch out to 45 cm and move in and out of their mouth at least three times per second.

Once the insects are inside their mouth, they are crushed against their mouth palates before being swallowed. The swallowing rate in Giant Anteaters is much higher than any other mammal.

The feeding process in Aardvarks is somewhat similar to that of the Giant Anteaters. They use their strong sense of smell to find food and send their long, sticky tongue out to eat it.

The difference between the two is that while Giant Anteaters usually hunt during the day, the Aardvarks are nocturnal animals and eat at night. Also, in addition to ants and termite, the Aardvarks also eat the Aardvark cucumber.

The Giant Anteaters are terrestrial animals and usually make a home for themselves in tropical rainforests, deserts, and xeric shrublands.

Native to South and Central America, these insectivores have a range stretching from Honduras to northern Argentina. It is believed that their population was also found in Uruguay, Guatemala, Belize, and Costa Rica, but has been extirpated.

On the other hand, the Aardvarks prefer to live in bushlands, savannas, grasslands, woodlands, where they can build their burrows and find sufficient food resources.

You can find these insectivores throughout the sub-Saharan regions towards South Africa. The places they don’t live in are the Ivory Coast, Namibia, Ghana, and Madagascar.

The male Giant Anteaters court their female partner by following them around and sniffing them. Their mating period lasts up to three days, during which they mate several times. Then comes the gestation period that stretches for 190 days, after which the female gives birth to a single pup. The new-born weighs around 1.4 kg.

The Aardvarks mate in their breeding season, which is followed by the gestation period of about seven months. Like the Giant Anteaters, the Aardvarks give birth to a single pup as well.

The offspring of Giant Anteaters are born with their eyes closed and can only open them after six days. The mother Anteater carries its pup around on its back to camouflage it.

For three months, the pup survives on the mother’s milk until it is mature enough to eat solid food. At the age of ten months, the pup is properly weaned and can live independently afterward.

Compared to the Giant Anteaters, the young Aardvarks mature quite early. By the ninth week, they start eating ants and termites. They are completely weaned at the age of three months and can build their own burrows when they are six months old.

The number of Giant Anteaters have been seriously dwindling in the last two decades. The leading causes of their declining numbers are the destruction of their habitats, dog-attacks, road accidents in the urban areas, etc.

In many regions, Giant Anteaters are also hunted for their hides and claws. In a study conducted between 2000-10, it was reported that the population of Giant Anteaters declined by 30% in the decade.

The International Union for Conservation of Nature (IUCN) has declared Giant Anteaters to be a Vulnerable Species. The Convention on International Trade in Endangered Species of Wild Flora and Fauna (CITES) also restricts animal specimen trade under Appendix II.

On the other hand, the Aardvarks lead such secretive, nocturnal lifestyles that it is difficult for humans to keep an estimate of their population in order to assess its growth or decline.

If people aren’t seeing many Aardvarks around, it could probably be because they don’t want to be seen. In any case, The IUCN has categorized these insectivores under in the Least Concern group for now.

Both Giant Anteater and Aardvark are popular in different ancient mythologies and cultures. The Giant Anteater is considered the trickster foil for the jaguar in the folklore and mythology of the Amazon Basin people.

Its long snout also lends it a humorous reputation. The Kayapo people wear masks of anteaters during their cultural ceremonies and rituals.

In the African folklore, the Aardvark is an admired animal because of its fearless stance against the soldier ants. Set, the Egyptian god is also depicted with an animal head that has a striking resemblance to the Aardvark.

Although Giant Anteaters and Aardvarks have the same diet and look somewhat similar because of their snout, the two are very different animals in all other aspects.