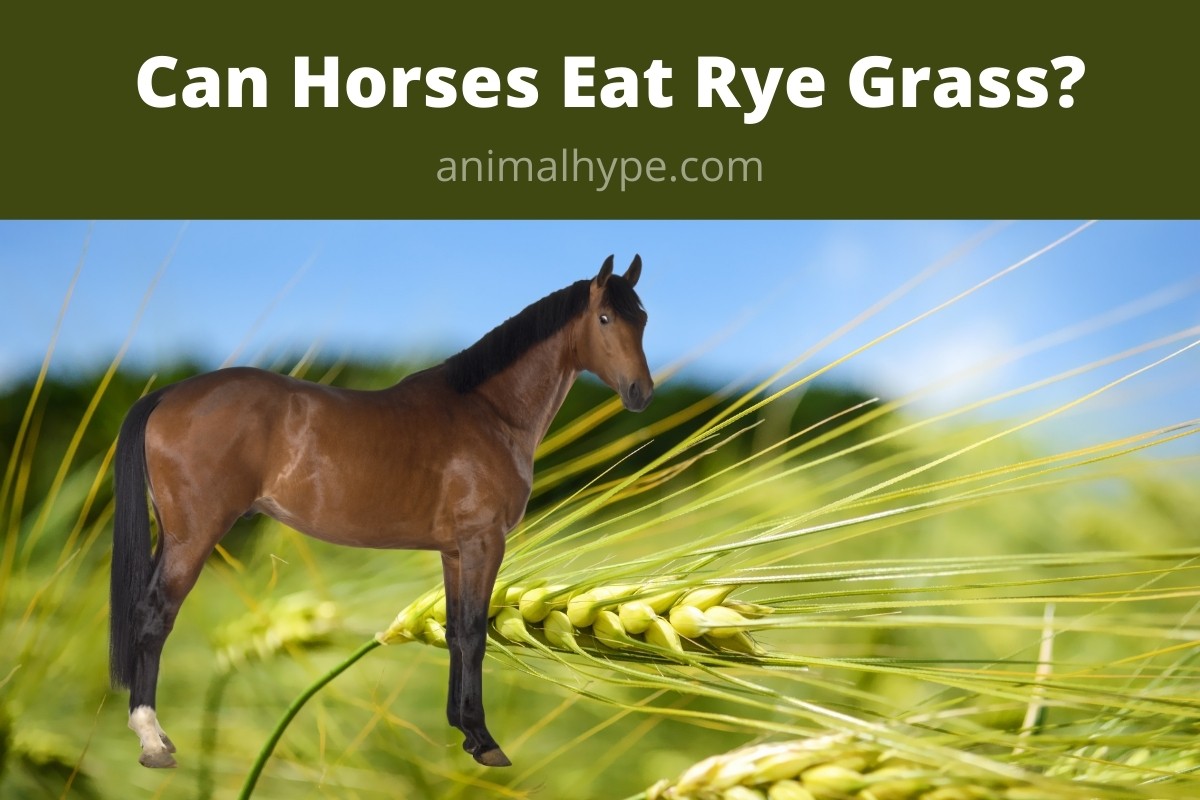 It might come as a surprise to many, but horses are primarily foragers that consume about 1.5-2% of their body weight every day. But can these equines eat any random grass or hay? While they can and would eat any grass that you’re growing on your lawn, it is best to feed them only horse-friendly grasses if you want them to remain healthy. But how would you find out which grasses are horse-friendly? What about ryegrass?

Can horses eat ryegrass? Horses should not be fed rye grass. In addition to lacking the nutrients that horses need, they’re also vulnerable to endophytes, which release harmful mycotoxins that can make your horse sick.

In this article, we will discuss why ryegrass is bad for your horse’s health. We will also talk about the differences between rye and ryegrass and whether horses can eat rye.

Many of you must already know about ryegrass, but we’re going to begin by talking about what ryegrass is for the benefit of those who do not.

Belonging to the sub-family of bluegrass (Pooideae), the ryegrass is a kind of tufted grass endemic to Europe, northern Africa, and Asia. These grasses are recognized by their clump-like growth and have recently been naturalized in North, South, Central Americas, Australia, and several other oceanic islands.

There are three different types of ryegrass: annual, perennial, and intermediate. Below, we will quickly go through all these varieties to understand how they are different from each other:

Also referred to as “Italian ryegrass,” the annual ryegrass is native to the southern parts of Europe and is often grown for silage, as a cover crop, and as an ornamental crop. Although it is called “annual,” it can behave as a biennial or even a short-lived perennial plant depending on the environmental conditions of its surroundings.

In the southeast, the Italian ryegrass is often planted in the fall as a winter pasture that dies in the following summer months. Because it is easy to plant and can grow rapidly, it is often used as an annual forage crop for dairy cattle.

Endemic to Europe, Asia, and North Africa, the perennial ryegrass ranks among the world’s highest quality forage grasses. This grass is primarily used in pastures where cattle animals like cows and sheep graze.

The perennial ryegrass has low growth and is dark green in color, with a smooth lower surface and the upper surface covered with parallel veins.

Although it cannot withstand harsh winters, it produces higher yields than perennial ryegrass. In terms of use, it is not much different from perennial grass and can often be found on the pastures for cattle.

Is ryegrass safe for horses to eat?

While we have established in the previous section that ryegrass is ideal for the cattle animals to graze on, can livestock animals like horses enjoy this grass?

Not really. Remember how we talked about horse-friendly grass in the introduction? Well, let’s say that ryegrass doesn’t belong to that category. And if you’re wondering why you are about to get your answers soon.

Why is ryegrass bad for horses?

Several factors make ryegrass unsuitable for the consumption of your horses, and we are going to list each one of them below:

There are several endophytes (endosymbiont fungus living within a plant) residing inside the ryegrass. These endophytes release mycotoxins that can prove to be lethal to the horses.

One such mycotoxin that is harmful to the horses is lolitrem B (found most commonly in the perennial ryegrass). You might have heard of a disease called “stagger” in the horses. Well, lolitrem B is one of the mycotoxins that lead to stagger. Some of the common symptoms of stagger in horses are:

If your horse has eaten mycotoxin-contaminated pasture by mistake or on purpose, the aforementioned symptoms might appear in about 7-12 days of the incident. At the first sign of these, you must take your horse to a vet right away.

Another mycotoxin released by the endophytes is ergovaline, an ergot alkaloid that acts as a nasty vasoconstrictor, constricting the blood vessels in your pet’s body. As a result, their entire body’s blood supply is cut-off, which leads to higher blood pressure and increased body temperature. Some common ill-effects of ergovaline on horses are:

So, these are the consequences of feeding endophyte-infected ryegrass to horses. However, if you can find ryegrass that has a low endophyte content or is endophyte-free altogether, would it be okay to feed them to horses? Unfortunately, not.

Apart from endophytes, there are other factors about ryegrass that can impact horses negatively as well. Let’s learn about all the major ones below.

The main reason behind ryegrass being beneficial for the cattle animals is the abundance of NSCs (Non-structural carbohydrates) in them. The NSCs promote weight gain and milk production in the cattle, which is the exact opposite of what we want for our horses.

Moreover, these grasses are also low in fibers, and horses need a highly fibrous diet. Thus, the NSCs in ryegrass makes it unhealthy for the horses.

Have you noticed how all the ryegrass varieties have a typically dark green color? This is because of the presence of photodynamic pigments in them. These pigments are activated by light and are known to cause photosensitization and photophobia in horses, and can also lead to mud-fever or sunburn in the long run.

While several grass varieties store their sugar in the form of starch for easy digestibility, the sugar in ryegrass is stored as fructans, a polymer of fructose molecules that is quite difficult for horses to break down. When the fructans reach their digestive tracts, they often have metabolic issues and can also suffer from laminitis diseases.

As you must already know, large farm animals like horses need plenty of minerals (such as calcium and magnesium) for the smooth functioning of their muscles, nervous and circulatory systems. However, since ryegrass grows in acidic soil, a large variety of fungi find a home in and around their base.

Thanks to these fungi, ryegrass leaves behind most of its minerals as it grows up. And you wouldn’t want to feed your horse grasses that do not meet their mineral requirements, would you?

After going through all the aforementioned characteristics of the ryegrass, it would be safe to assume that these grasses, with or without the presence of endophytes in them, are not suited for horses.

Many people tend to think that both rye and ryegrass are parts of the same plant. This, however, is far from the truth. While ryegrasses are various tufted grass, rye is grown as a grain crop with small and hard kernels, just like milo or wheat.

Although rye is not generally grown as a cattle grain, it has the nutritional value of corns, with an even higher protein content, which is why it can be a healthy addition to your horse’s diet. Below are a few pointers you might want to keep in mind:

Which herbs should I feed my horse during winters? If you’re trying to keep your horse warm during the harsh winter months, herbs like ginger, cinnamon, licorice root, and kelp can do the job most efficiently.

How many times do I need to feed my horse in a day? Although you should ideally feed your horse three meals a day, they can also survive on two meals without any trouble.

This question was answered in this article with information helpful to anyone trying to keep their horses safe and healthy. The article includes information on the not-so-beneficial grasses that horses should not be eating and insight into the endophytes that are present in these grasses and how they can harm horses.

Ryegrass varieties are ideal feed for cattle animals like cows and sheep, for they promote weight gain and milk production. However, for the horses, these grasses are not only unsuitable but also lethal. The mycotoxins, fructans, and photodynamic pigments in the ryegrass are all unsafe for horses and can cause several diseases in them.