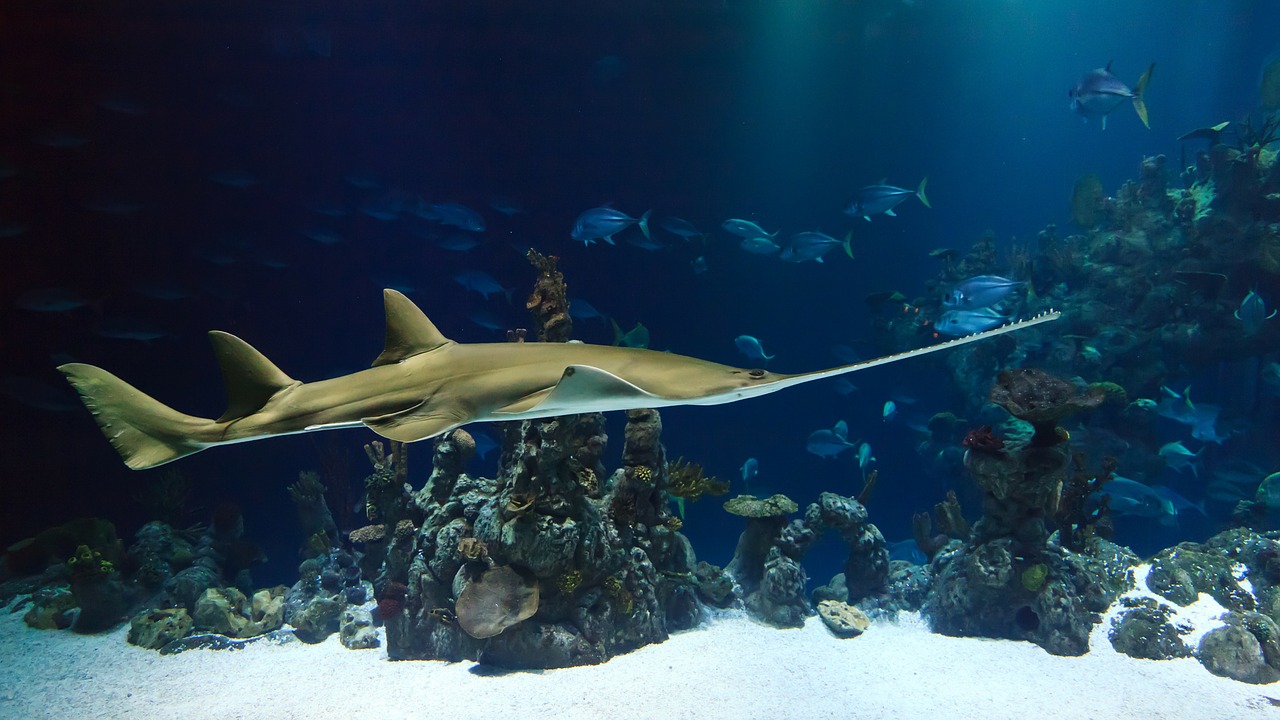 The saw fish feeds principally upon other fish. When it sights a school of fish, it swims into their midst, lashing back and forth with its wicked-looking saw and leaving a trail of dead and dying fish in its wake. When it has tired of this sport, it returns and leisurely devours as many of its victims as it can, leaving the remainder for other hungry denizens of the sea.

The sawfish is quite willing to attack large fish or even whales. After lacerating its victim so severely that part of the insides are exposed, the saw.fish swims along and feeds upon the torn flesh and trailing entrails.

Sawfish are not entirely confined to salt water and have been known to go some distance up a river and attack human swimmers.

It has even been reported that in parts of India sawfish have attacked human beings and cut them completely in two with their jagged weapon. I have not entirely confirmed these reports, but it is certain that a saw fish could inflict terrible wounds.

The young are born with the saw well developed, but at the time of birth the saw is encased in a sheath which prevents injury to the mother.

Sawfish are among the largest of fish. Specimens have been reported which were twenty-seven to twenty-nine feet long and weighed approximately 4500 pounds.

Some people have the impression that the swordfish and sawfish are quite similar, but actually they are very different. The sword of the swordfish is sharp, and smooth along the sides, while the saw of the sawfish is blunt on the end, flattened, and has large teeth along each edge. In addition the sawfish, which is related to the sting rays, is a rather flattened species, whereas the swordfish is compressed from side to side as are most fish.

The weapon of the swordfish is its upper jaw, which has become elongated into a sharp swordlike structure three or more feet in length. When young swordfish first hatch, they do not have a sword, but it develops rapidly as they grow. These fish feed upon other fish. Large species they may spit with the sword; small fish they procure by swimming into a shoal and striking rapid blows from side to side.

Swordfish sometimes attack such large creatures as whales and sharks and usually emerge victorious. They are among the swiftest-swimming fish in the ocean and a clumsy whale is quite helpless against their flashing attacks.