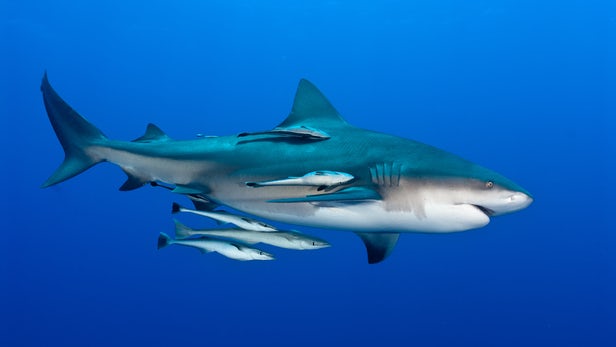 Shark suckers (other names include sucking fish, pilot fish and remora) are slender grayish fish two to three feet long. On top of their heads is an oblong sucker-like disc, with which they attach themselves to almost any kind of moving object such as whales, turtles, or even ships, although they are most often found associated with sharks.

The reason for their peculiar habit is not entirely clear.

They do gain a certain amount of protection from their hosts and sometimes eat scraps of food left by them. They also gain free transportation, but the shark sucker is a good swimmer and indeed can frequently swim faster than the shark to which it is attached. Possibly they are just naturally lazy and prefer to spend their energies in ways other than swimming.

Contrary to popular opinion, the shark sucker does not directly harm the shark by attaching to it. However, if a shark is host to several suckers, it must expend considerably more muscular effort in swimming.  Very thin sharks have been found to which several of the sucking fish were attached and it is thought probable that these hobos contributed to the shark’s poor physical condition.

In some parts of the world, especially in the South Seas, natives use the shark suckers as fish hooks. They tie a line to the tail of a sucking fish and, when the game, fish or turtle, is spotted, toss the remora overboard. It is allowed to swim about until it fastens onto its prey, which is then slowly hauled within capturing or harpooning distance.  A remora attaches to its host so firmly that it is almost impossible to pull it off without tearing its sucker.

At one time it was believed that shark suckers could stop ships.  According to one story, it was a large shark sucker that attached itself to Marc Antony’s ship, thus delaying his arrival for the battle of Actium and thereby causing his defeat.