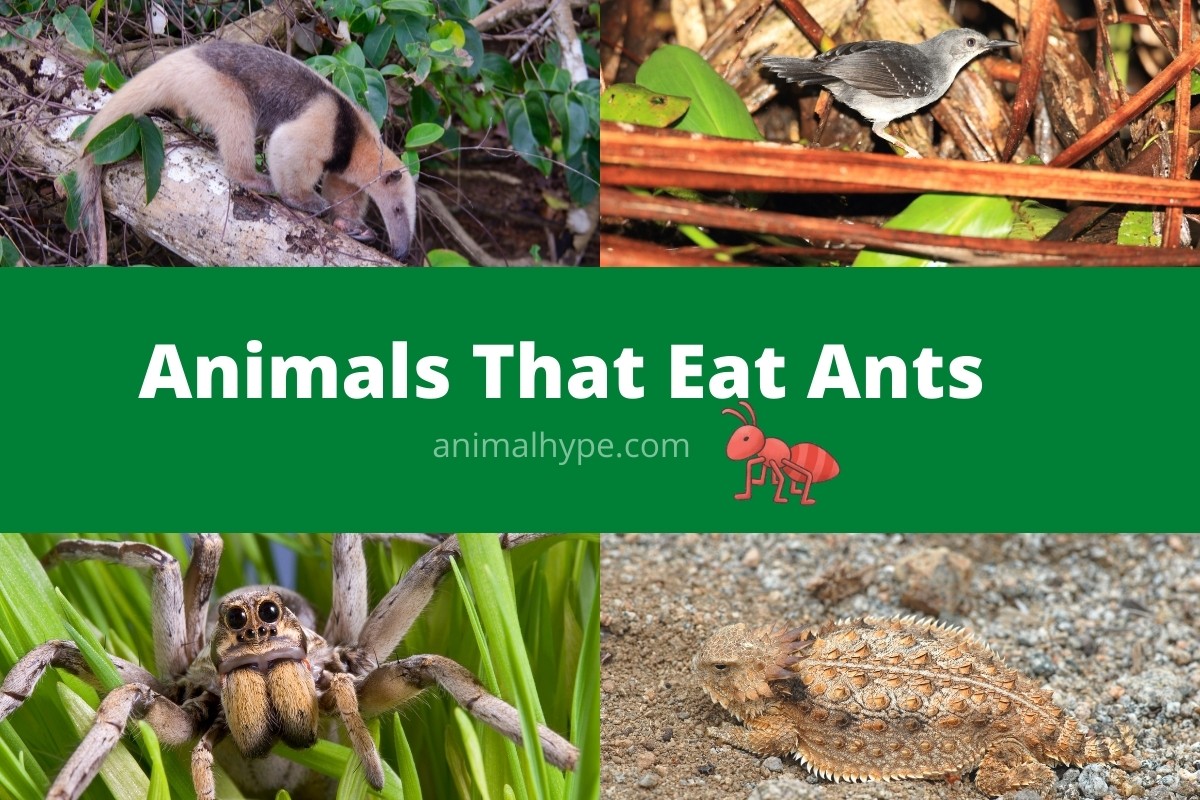 What animals eat ants? It is a question many people internet users ask themselves frequently. And as it turns out, not just any animal is up to the task of devouring an entire colony of ants.

Several kinds of animals can eat ants, however, and each has its own unique methods of consumption. This article will introduce you to the types of animals that eat ants, along with information about how they behead and consume their prey.

Ants are small insects that are common in almost every part of the world. Due to their widespread population and tiny size, most people think of them as ordinary insects. However, on the contrary, these little crawlers have extraordinary qualities.

They are strong enough to lift a burden that is about 20-50 times their body weight; it is nothing short of superhuman strength. Moreover, ants are as old as the dinosaurs, but they also lack both lungs and ears and have two stomachs instead (in one of which food to be shared is stored).

Many of you might be learning these facts about ants for the first time. Another fact that you’d like to know is that they are a great source of fat and protein despite their size. This, along with their abundant population, makes them a great food resource for many animals and birds.

In this article, we will talk about different kinds of animals (mammals, birds, reptiles, amphibians, and insects) that either feed exclusively on ants or consume them as a part of their regular diet.

For your convenience, we’ll divide these animals into 5 different categories: mammals, birds, reptiles, amphibians, and insects.

Anteaters are a family of mammals that belong to the suborder of Vermilingua, which can be translated to “worm tongue” in English. As the name itself suggests, the anteaters basically feed on ants and termites.

The anteaters are close relatives to the sloths and the armadillos. Although these mammals used to have a large family once upon a time, today, only the following four anteater species are extant:

The Sloth Bears are a vulnerable species of bears that are native to the Indian subcontinent.

These bears have a somewhat lankier body frame than the other bears, along with a long lower lip and palate that helps them sucking up insects.  For this reason, the sloth bears are also known as “Labiated Bears”.

Other than these features, they are more or less like the other bears; they have a shaggy fur coat with a mane around their face and claws that look like sickles.

Although the sloth bears are omnivores like the other bear species, if you take a narrower glance at their diet, you will learn that they’re primarily insectivores, with the ants and termites making up a large part of their diet.

Native to Africa and Asia, Pangolins are mammals that are closely related to the Anteaters.

These nocturnal creatures do not look very different from the anteaters, except for the large, protective scales grown all over their body made of keratin. These scales are unique to the Pangolins out of all the mammals; they’re also called the “Scaly Anteaters” because of them.

The Pangolins are actively hunted for their meat and their scales (which is used in traditional Chinese medicine), which is why most of their species have gone extinct, and the ones that are still living are declared to be either endangered or threatened by the IUCN.

Just like the anteaters, the pangolins mainly feed on ants and termites as well. Following are some of the most common pangolin species:

The only extant species of their order (Tubulidentata), the Aardvarks are medium-sized, burrowing mammals that are native to Africa. They have sharp claws, strong legs, and a long, pig-like snout that helps them sniff their food.

Although these nocturnal creatures are omnivores, their diet mainly consists of ants and termites. The only plant-based matter they consume is the Aardvark Cucumber (Cucumis humifructus), an underground tropical vegetable named after them.

Commonly known as the “Spiny Anteaters”, the Echidnas are the only family of egg-laying mammals other than the platypus.

These mammals are endemic to New Guinea and Australia and have the same diet as the anteaters (ants and termites).

Due to the similarity in their diet, most people think that the echidnas are close relatives of the anteaters. However, this is not true. It is believed that the echidnas were once aquatic creatures (about 50 million years ago) but have evolved and adapted to terrestrial life over time.

The only four extant echidna species are as follows:

Also referred to as “Bushbirds”, “Antvireos”, “Bare-eyes”, “Antwrens” and so on, the Antbirds are a large family of passerine birds that are scattered all over the tropical and subtropical areas of Mexico, Argentina, and Central and South Americas. Some close relatives of these birds are the Antpittas, the Antthrushes, the Ovenbirds, and the Tapaculos.

Although the Antbirds are quite small in size, they have powerful legs, rounded wings, and a hook-tipped, heavy bill. The color of their plumage usually varies between white, brown, rufous, and grey with different patterns.

While they mainly feed on insects and other arthropods, there are 18 species of these birds that follow the swarms of army ants to feed on both these ants and their prey.

These particular species are also referred to as the “Ant Followers”. The Bicolored Antbirds (Gymnopithys bicolor) are an example of obligate ant followers.

Closely related to the Antbirds, the Antpittas are a family of small passerine birds that belong to the tropical and subtropical parts of Central and South America.

These sexually monomorphic birds are almost tailless and hop typically like the thrushes on their comparatively long legs. Both these physical traits help them in hunting for insects on the ground.

There are 50 different species of Antpittas, divided into 5 genera (1 large, and 4 smaller genera), and all of them are insectivores, with ants making a large part of their diet.

Woodpeckers of the Colaptes genus

They all have either a brow or a green body with typical black markings scattered all over them. They also possess colorful markings on their heads.

The fact that makes the woodpeckers of this genus different from the rest is their feeding nature. Unlike other woodpeckers that hunt for their prey in flight or on the trees, the Colaptes woodpeckers are more terrestrial and tend to hunt for food on the ground as well. Insects, particularly ants, are their primary diet.

Some of the common Colaptes Woodpeckers are as follows:

These lizards are native to North America and have a sluggish movement, much like the true toads. Because they live in arid and semi-arid areas, the spines on their backs and sides are modified into reptile scales to prevent water loss.

The horned lizards are insectivores and mainly feed on the harvester ants; they lie motionlessly for hours, waiting for the trail of these ants to pass them by so that they can eat them.

An ant is an ant, until it ends up in the belly of a horned lizard. (Source: My brain!)

Also known as “Thread Snakes”, the Blind Snakes are an infra-order of burrowing snakes that, although snakes, are similar to the earthworms in terms of their appearance and burrowing tendencies.

As their name indicates, these snakes don’t have a vision like ours. However, they do have black eye-spots that help them in detecting light. The blind snakes have teeth in their upper jaws, while their lower jaws are stiff, restricting them to eat insects small enough to fit their oral aperture.

The blind snakes mostly feed on the eggs and the larvae of termites and ants instead of the insects themselves, which might not fit into their mouth. There are over 200 recognized species of the blind snakes, and some of them have been named below:

Also known as “Poison Arrow Frogs” and “Poison Frogs”, the Poison Dart Frogs are a group of frogs endemic to Central and South Americas that belong to the family Dendrobatidae.

The most striking feature of these frogs is their brightly-colored bodies. However, the true purpose of their colorful appearance is correlated to their toxicity. Some poison dart frogs are extremely poisonous, while others are only mildly toxic.

The toxicity of these frogs is, in fact, dependent on their diet. The species that feed only on ants, mites, and termites are more poisonous, while those with a diverse diet lack the same intensity of poison.

There are over 180 species of poison dart frogs in the world, and some of their common species are listed below:

The narrow-mouthed toads are a large and widespread frog family that houses over 600 different recognized species. As their name itself suggests, these toads have a small body and are either terrestrial or arboreal amphibians.

These frogs’ mouths are too narrow in proportion to their wide bodies, and they feed on a variety of invertebrates, particularly ants.

Some of the common narrow-mouthed toad species that eat ants are:

Spiders are a large family of eight-legged arthropods that are carnivores and possess fangs (with or without venom) to attack and kill their prey.

There are over 45,000 recognized species of these arthropods in the world. While most of them feed on insects like ants, mosquitoes, flies, and moths, some larger species feed on other, smaller spiders. The Lynx Spiders, Jumping Spiders, and Black Widows are some of the common ant-eating spiders.

Like the Fruit Flies (Drosophila melanogaster), the Phorid Flies are a family of hump-backed flies known for their tendency to run rapidly instead of flying. For this behavior, they are also called “Scuttle Flies”. The family of these flies consists of about 230 different genera with over 4,000 recognized species.

The phorid flies have unique reproductive behavior. They lay their eggs within the fire ants’ body, so that when the larva hatches, it eats its way out of their body, killing them in the process. Because these flies prey on fire ants, they are often used as a pest control method.

Antlions are a group of over 2,000 different insect species belonging to the family of Myrmeleontidae. These insects receive their name after the predatory tendencies of their larvae.

The antlion larvae are also referred to as “Doodlebugs” and tend to dig pits to trap insects (mostly ants) and eat them.

Unlike their lethal larvae, the adult antlions are quite harmless; they appear very much like the dragonflies and feed on nectar and pollen.

Whenever we talk about cannibalistic ants, the name of the Fire Ants always comes up first.

They are several ant species that belong to the genus of Solenopsis. These ants are omnivores that not only feed on smaller ant species but at times on other fire ants as well.

Similarly, the army ants are said to feed on other ant species as well. In response to their cannibalism, many smaller ant species try to kill the scouts of fire and army ants in an attempt to protect themselves and their own.

Having covered all animals that are predators of ants in detail, we can see that ants take up a special place in the food web. It’s a predator-prey relationship, and it seems to be a beneficial one.

Ants are fascinating creatures that can be found on every continent except Antarctica. They have different wildlife that eats them ranging from honey ants to beetles to birds to anteaters.

10 Animals That Eat Their Own Babies