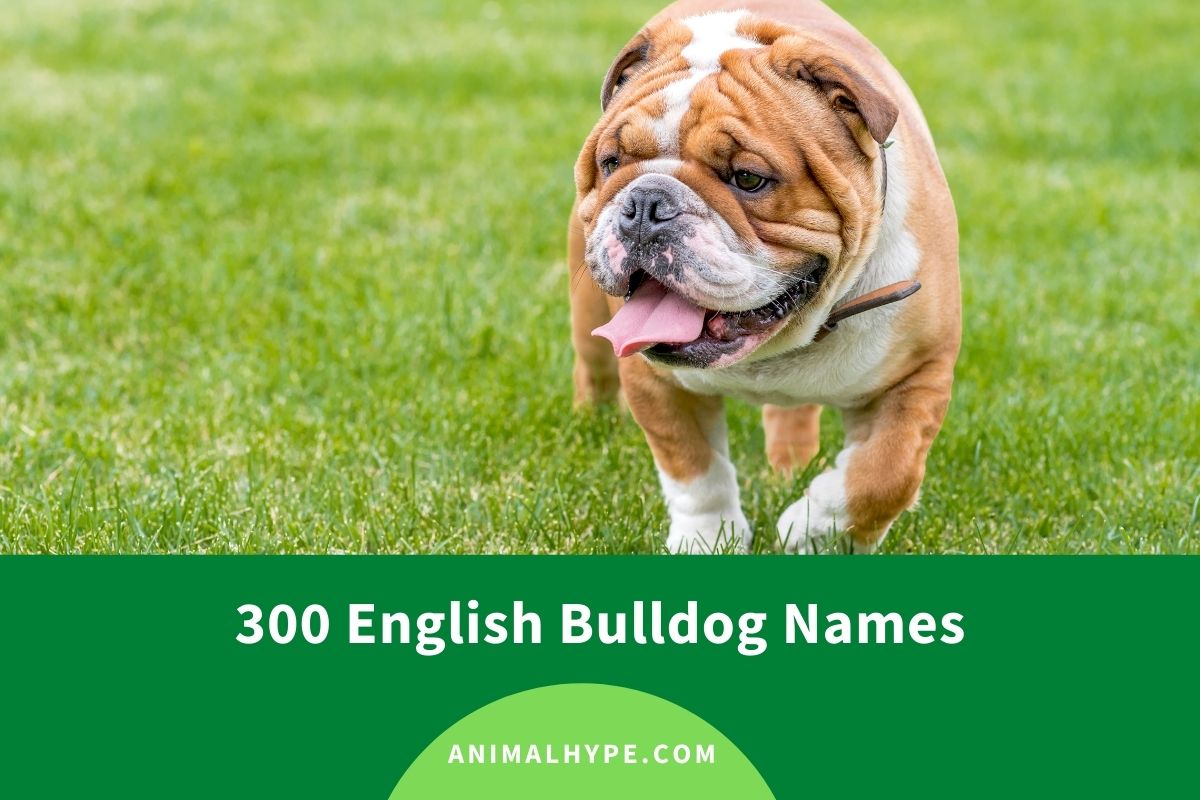 English Bulldogs are among the most adorable dogs in the world. And when it comes to naming them, there is a wide variety of ideas or inspiration available, ranging from funny puns and viral trends to pop culture references and influences taken from pop music or TV series.

English Bulldogs are loved all over the world for their extroverted personalities. These canines have the signature short-muzzled heads seen on American bulldogs, but with much smaller bodies. This gives them a gruff appearance but packaged into a cuter and more manageable size.

English bulldogs are known for their sweet and calm disposition. Female English Bulldog names should reflect these traits, either through their meaning or through their association with polite sounding female names.

Male English Bulldogs are very friendly and curious. However, they also exhibit great bravery and loyalty. These qualities should be highlighted in the canine’s name. Some wonderful male English Bulldog names could be based on old European gentleman names.

English Bulldogs have also been used in a variety of films. These dogs are often chosen for their tough appearance, but also sometimes their pudgy-ness.

Some English Bulldog owners enjoy giving their pets funny names for entertainment value, or simply to lighten the mood. Certain funny names can complement the canine’s gruff appearance, while others contrast with it for comedic effect. Other funny names are dog puns adapted from pop culture.

English Bulldog puppies are among the cutest puppies out there. These canines are often given names that reflect that pudgy yet adorable appearance. A good puppy name should also be suitable for the dog once they are fully grown.

Owners that wish to show off their canine’s cuter side should choose names accordingly. Many of these names are simple human names that are enjoyable to pronounce.

Some English Bulldogs have three-color fur. Such dogs may have names that sound colorful or vibrant.

If your English Bulldog has a cool and calm demeanor, you should give them a name that highlights these qualities. A cool sounding name could be any word that describes an extraordinary character, or an impressive individual from history.

Despite their relatively small size, English Bulldogs can be quite strong. This has led many owners to give their dogs names that convey strength and resilience.

Some owners enjoy giving their English Bulldogs royal-sounding names. These are often based on the names of royalty throughout history, or names that simply sound “regal”.

Some dogs are just so special that they deserve a rare name that makes them stand out from the rest. These could be unorthodox human names, or the names of special items that hold some significance to you.

If you own a white English Bulldog, you can choose one of these names to complement their fur color.

English Bulldogs are popular with many Hollywood celebrities. These dogs have a wide variety of names.

These were some of the really awesome name ideas for your pet English Bulldog. Before naming your pet dog, you should know that English Bulldogs are known to be great family dogs so it’s important to pick a name that suits their personality. Whether you prefer short and sweet, cute and curvy, or long and quirky, there are plenty of awesome names on this list.