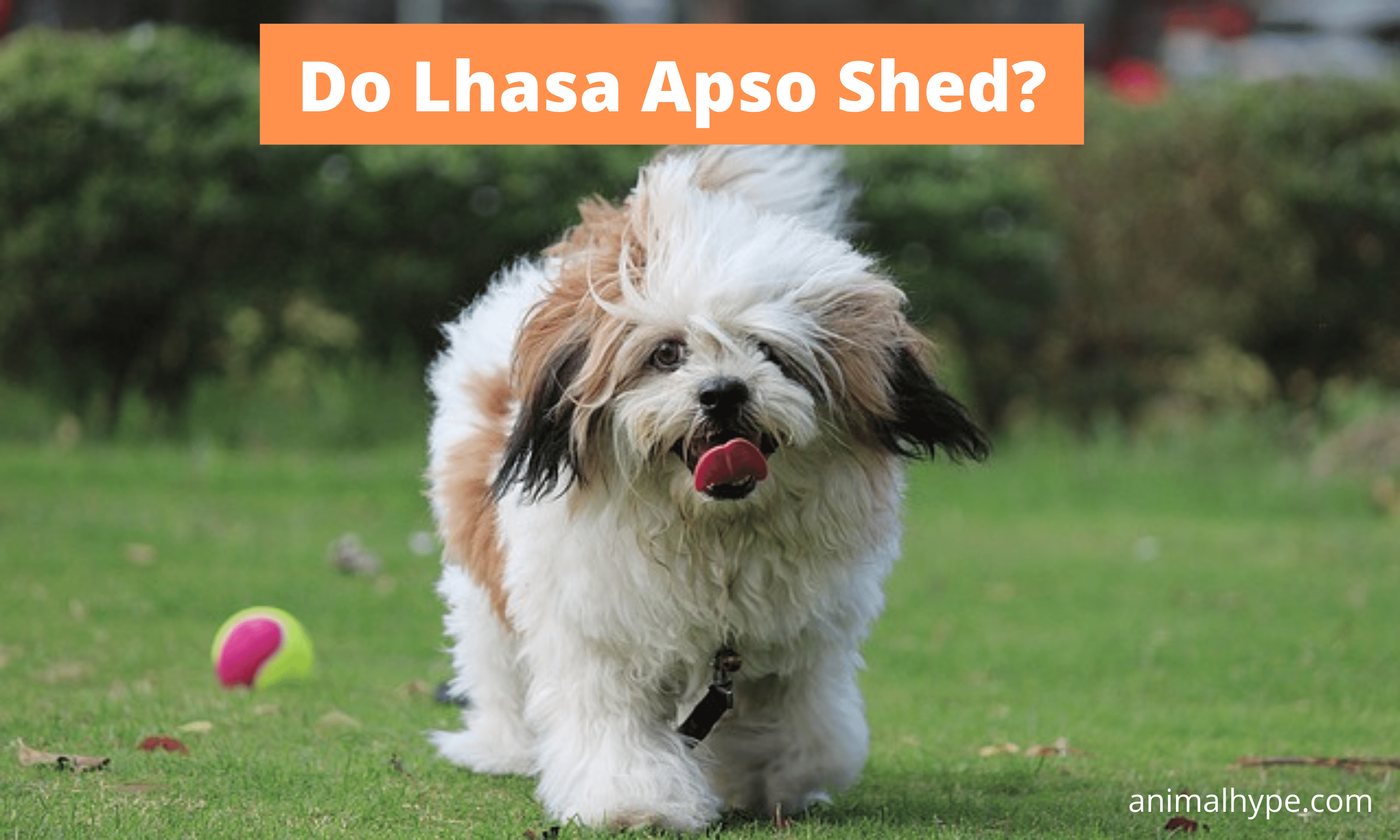 We have all, at some point, come across a fur-ball, playful and energetic frisking around kids and wondered what it would be like to have them around us. The Lhasa Apso, arguably, is one such breed. However, one of the most recurring questions pertaining to them is, with regard to hair shedding and its response to allergies, owing to their furry coats and long hair. If such thoughts have led you to a den of contemplation, you are knocking on the right door.

Do the Lhasa Apso shed the hair? Yes, Lhasa Apsos do shed, but sparsely – they are considered low shedding dogs. The fact that they shed less also makes them hypoallergenic and suitable for people with allergies but doesn’t exempt them from any kind of grooming. When it comes to their maintenance, they are deemed labor-intensive breeds that require consistent bathing, brushing, and care.

What kind of coat does Lhasa Apso have?

Since the breed hails from the freezing estates of the Himalayas, the Lhasa’s have a double coat; the outer/top coat has guard hair that helps maintain the flatness of the outer layer, so it stays smooth and free of tangles. The inner coat is often soft and fine, aiding in keeping them warm.

It is only the undercoat that sheds, that too meagerly. This is because they have long hair, which amplifies their weight, making it heavy, thus resistant to continuous shedding in large quantities. It is widely believed that they are similar to humans in this sense; they shed gradually, which also minimizes the risk of matting and tangling.

Lhasa’s are popularly known to have long- beautiful hair that gives out a regal appearance, reinforcing the breed’s long-cherished ancestry in Tibet. Their hair is often heavy and dense, available in an array of colors ranging from white, gold, and red, with several shadings.

The texture neither resembles wool or silk but boasts of a solid volume, which, if groomed well, can grow straight to the ground without curls/waves. Some would even argue that the hair covering the body is so lush and dense; that it is longer than it is tall.

When it comes to the length of the hair, there are two categories – long and shorthaired Lhasa Apso. The long hair Lhasa Apsos have a thick coat that breaks in two sections at the front and drapes on both sides of the body.

They are mostly touted as the show dogs/ supermodel dogs because of the flowing hair, which is styled in various ways. The short hair Apsos have a relatively shorter coat, which is cut at a cap of 1 to 2 inches.

Why is Lhasa Apso Hypoallergenic? 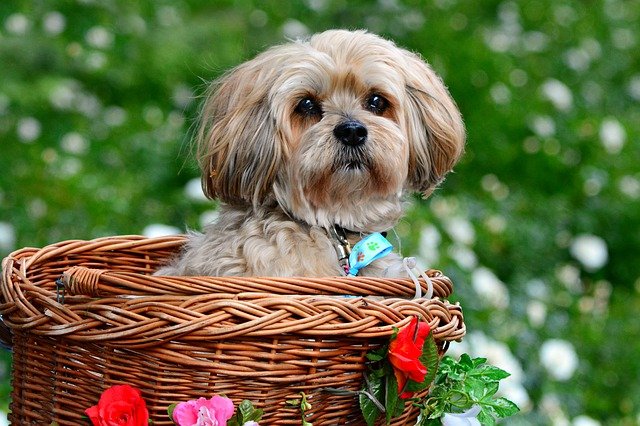 Before diving into this, it would be helpful to understand the meaning of ‘hypoallergenic’. Typically, a hypoallergenic dog is one that doesn’t trigger or exacerbate symptoms in people with pre-existing allergies. Some of the most common sources of pet allergies include dander, saliva, and urine.

Now, I know what you must be thinking? Does a Lhasa not urinate? WOW. No pet training! But no, they do and in copious amounts, just like any other dog.

What eludes them is that they are low-shredding dogs, which causes less dog fluff to be released in the environment, thus reducing the amount of dander (tiny flecks of skin shed by dogs and other animals with fur or feathers).

Since dander is one of the chief contributors to pet allergies, its diminution serves as a major plus in favor of the breed. Please note regular baths and brushing help remove the dander off the skin or their spread around the house. It is also recommended to keep Lhasa apso shorthaired as it significantly reduces the risk of the above.

Saliva can also cause allergies, although they are not as hazardous and common as dander, which in itself contains dried saliva. Fortunately, this breed doesn’t drool a lot, subtracting another plausible allergen concern.

Having said that, one must also note that the idea of a hypoallergenic dog has been around for longer than anyone can remember, even though its origin is relatively unfounded.

Its most compelling hypothesis emanates from the mere fact that shedding causes most allergies amongst people, thus kick-starting several studies about hypoallergenic dogs and their relationship with shedding.

In our opinion, it is best to believe no dog can be 100% hypoallergenic because of the presence of some dander (even if less than usual) and make an informed choice after fully evaluating one’s health/allergy tolerance.

What are the issues one may face with Lhasa hair?

We have all heard the saying ‘what’s good doesn’t come easy’; well, that very much applies to the long and luscious Lhasa hair. While it does look light, shiny, and long at the outset, it does pose a few problems that are enumerated below:

The first and most common is the formation of mats, which refers to the knotting of hair around itself. These can occur due to the excessive tangling, brushing of hair against uneven surfaces (picking up parasites like fleas), incorrect shampooing, etc. Matting causes hindrances in temperature regulation and skin irritation, thus resulting in discomfort and restlessness. The best way to mitigate the same is through thorough shampooing, using natural/organic products, and providing sufficient hydration. It is recommended to use conditioner/grooming oil/detangling spray after shampooing for easy detangling.

Since the breed has long fur, it may sometimes creep long into their eyes, rendering them constantly irritable and teary. If not wiped off in time, the tears can leave stains in the eye, which may affect the eyesight in the longer run. It is advisable to keep a check on the eyes and wipe off immediately in case of tears. Many families keep their dogs in ponytails or buns to keep the hair out of the face.

Just like the eyes, the hair can cause itch and stains around the ears as well if not taken care of. One must pay special attention to these areas, more so because of their sensitivity, and wipe off liquids as soon as they begin to emerge.

Lhasa’s may be susceptive to hair loss due to certain food sensitivity, weather changes, or hair products that may cause itching, which inadvertently leads to skin diseases and hair loss. It is best to carefully choose suitable hair products and apply shampoo thoroughly.

Tips on grooming a Lhasa

With beautiful hair comes heavy responsibility to maintain them, not just for humans but dogs as well! One of the most challenging and daunting aspects of having a Lhasa Apso is the frequent grooming and bathing that they require.

This Tibetan breed can be bathed and groomed as regularly as once a week up to every six weeks, contingent on its activity quotient and the length of coat. Below are a few things to keep in mind for the same:

Brushing – It is always advisable to comb and brush their hair every day. While brushing, make sure to get to the roots so as to untie all the knots that may have formed underneath. While frequent trimming makes it easier to brush, it doesn’t eliminate the task altogether – the breed, under every circumstance, must be brushed every day.

Bathing – Bathing is essential to ensure the health of the breed, particularly due to their susceptibility to skin infections, which stems from their long and smooth hair. While bathing, the first step is to wet the hair gently with water, then apply the shampoo all around till the roots in a downward motion. After that, it’s time to take matters into one’s hands.

Use the fingers to brush through the hair vertically to reduce the risk of tangling. Once done, rinse them with water and put conditioner. It might be better to cool the water temperature in the last round to ensure all the product is waned out.

Many people make a common mistake of rubbing their dogs in the towel after the bath, which results in unnecessary tangling. It is best to simply pat the dog with the towel and manually squeeze out water from the legs, ears, and tail to dry them out.

Combing – Since the breed is parted from head to tail, use a metal comb/parting comb to finish the coat. Start at the neck and tread the comb down to the spine, so the hair falls evenly on either side. Then spray with a hydrating conditioner and give them a tender rub.

Trimming – You can either trim a dog yourself or seek external help – both warranting a lot of attention. It is good to trim the facial hair to stop the hair from getting in the eyes. Besides that, the ears, paws, and tails need to be trimmed cautiously with a pair of scissors.

Some of the most important grooming tools that you must add in the cart include:

A Lhasa Apso may warrant a lot of effort when it comes to their maintenance since one has to regularly bathe, brush, and groom them. It also translates into less dander/hair pollutants, an important prerogative for many households, especially with sensitive allergies.

Other than their grooming needs, it is vital to provide a balanced diet to alleviate their nutrition levels. It is also important to brush their teeth and cut their nails regularly to maintain proper hygiene while being vigilant for any infection signs.

Despite being outdoor pets, it is always better to take them for walks to keep them active and compliant. On the whole, they are a friendly, affectionate, and sensitive breed, full of glory and splendor.