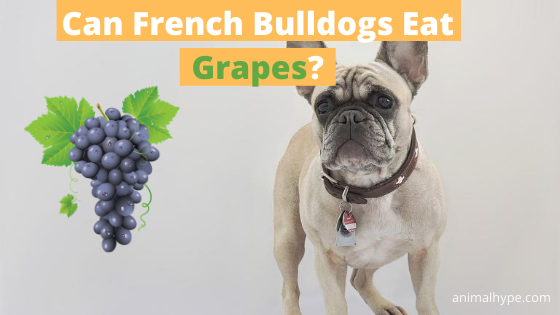 If you own a French Bulldog, you might know how much they love treats, especially if it is out of their usual diet. Most pet owners prefer giving them fruits as treats because of their taste and nutritional value. But did you know that some fruits are forbidden to French Bulldogs? These forbidden fruits are so toxic that some of them even pose a serious threat to their lives. So, what about grapes? Can French Bulldogs eat grapes?

So, can french bulldogs eat grapes? No, French Bulldogs should not eat grapes. Though grapes may seem to be a seemingly nutritious treat to dogs, they are highly toxic to dogs. Ingesting even a single grape can cause severe health issues to them. Researchers are yet to find out the exact cause for this toxicity, but it was found that grapes are toxic to dogs irrespective of their breed, age, or gender.

The toxicity of grapes is not limited to fresh ones; instead, the dried grape raisins are equally toxic to dogs. As a responsible pet owner, it is essential to keep in mind that just because a fruit is safe for human consumption doesn’t make it safe for your dogs.

This article will discuss how grapes are toxic to dogs and other relevant information that you ought to know. Hop on! 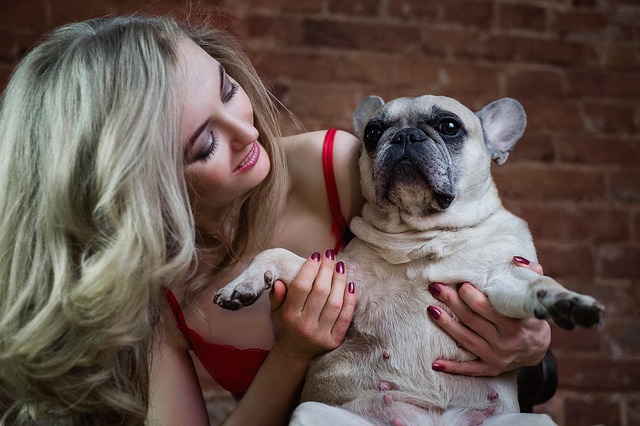 No, French Bulldogs cannot eat grapes. As said earlier, grapes & raisins are found to be extremely toxic to dogs in general. What may appear to be a seemingly harmless fruit can lead to kidney failure in dogs and eventually lead to death.

Researchers are yet to find out the component in the grape that makes it highly toxic to dogs. But they have ruled out pesticides and fungus on grape to be the toxic element in it. Though they haven’t identified the exact cause for toxicity, they have found that the toxicity is dose-dependent.

Dose-dependent means that higher the dose higher will be the toxicity. This is where the size of French Bulldogs comes into consideration. French Bulldogs being small in size, eating even a few grapes can cause severe issues to them.

Due to these reasons, you shouldn’t feed your French Bulldogs grapes!

How many grapes will hurt my French Bulldog? 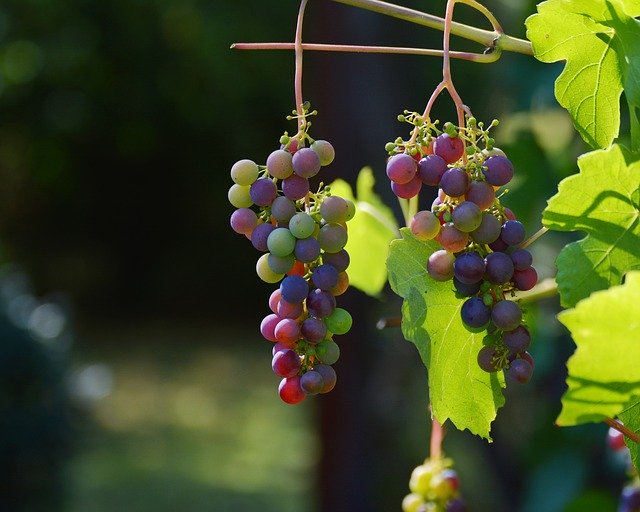 As said in the earlier section, researchers are yet to identify the exact cause of grapes being toxic to dogs. But they have determined that grape toxicity is dose-dependent. This means that for a heavy dog breed, one or two grapes may not be fatal, and for a smaller dog breed, even a single grape can prove to be fatal.

Although they appear muscular, French Bulldogs are small, which means that even a single grape can cause serious health issues.

It is better that we don’t find out how many grapes can a French Bulldog eat. The best thing to do for your canine friends’ health is to keep them away from grapes! 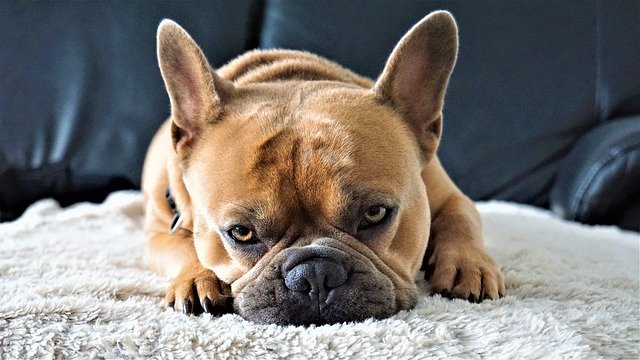 The symptoms of grape poisoning in French Bulldogs depends on the level of intoxication. For instance, the symptoms may not be the same if they eat a single grape, and if they eat a lot of them.

Symptoms of dehydration include

It is vital to keep your dog hydrated when there is excessive vomiting or diarrhea.

Another common symptom associated with grape poisoning is a lack of urine production. This is caused because of renal failure. Renal failure in dogs is difficult to identify, which makes it life-threatening.

Renal failure is something that needs immediate medical attention. If not treated on time, it can lead to your dog’s death.

If you suspect that your dog has eaten grapes, the best thing to do is contact a vet.

How do I know if my French Bulldog ate grapes?

It can be hard to know whether your dog has eaten grapes or not because grape poisoning symptoms can be similar to that of other illnesses. For instance, vomiting and diarrhea can be a symptom of an umpteen number of diseases.

One way to identify whether your dog has eaten grape is to inspect their droppings & vomit for undigested parts of grapes.

But it is important to note that not all dogs develop grape poisoning symptoms in the same period. Generally, it takes 24 to 48 hours before your canine friend starts developing any symptoms. It is even possible that our dog might not develop any symptoms before finding themselves suddenly gripped by acute kidney failure.

If there were grapes at home and suspect illicit snacking, the best thing to do is keep an eye out on your dog. Look for any change in the dog’s behavior. The chances are that the dogs would be in excruciating abdominal pain and lethargic at the same time.

Either way, it is important to contact your vet at the earliest. If taken on time, all they might need is induced vomiting to flush out the grape!

If you have dogs at home, we would always recommend keeping fruits such as grapes away from your dog’s reach!

How to treat grape poisoning in French Bulldogs?

Treatment for grape poisoning depends on its severity. In some cases, it might not even require any special treatment. But it is for the vet to decide the best treatment methodology. You should contact your very in case your dog eats grapes or shows potential signs of poisoning.

As said earlier, not all grape poisoning can be life-threatening to your dogs. The best thing to do is to contact your vet at the earliest.

Depending on various parameters, your vet may choose to induce vomiting to flush out the grape. If they suspect poisoning, they may feed your dogs activated charcoal to absorb the toxins.

In extreme conditions, when the poison might have affected your dog’s normal renal functioning, the vet may administer medicines to keep the kidneys functioning. If your dog has had renal failure, the vet may even advise starting dialysis.

Can I feed raisins to French Bulldogs?

Can other dogs eat grapes?

No, grapes are equally toxic to dogs irrespective of their breed or age. As said in the earlier section, the extend of grape poisoning in dogs is dose-dependent.

This means that if a Great Dane and Chihuahua were to eat one grape, they would have different poisoning levels. Due to their small size, the Chihuahua will have a higher level of poisoning than the Great Dane.

You should never feed grapes or raisins to your French Bulldog at any cost. If they were to eat grapes accidentally, you should contact your vet at the earliest!