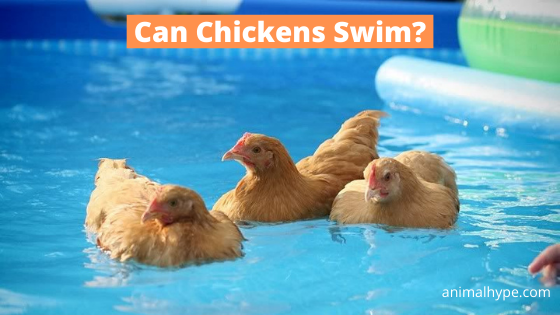 Chickens are probably the most entertaining of all the household pets, surpassing even cats. If you’re a pet-parent to a chicken, we can bet that your phone’s gallery is filled with cute and funny videos of your chicken going about its normal business, which you find to be hilarious. Have you ever thought of taking your feathered pet swimming with you? Probably not. Chickens are primarily birds, and birds don’t generally swim, right? Let’s find out whether or not chickens can swim or not.

Can chickens swim? Although the anatomy of these poultry birds is not built to swim, they can manage to swim somehow. However, their swimming lacks any skill and is mostly a survival mechanism. Moreover, water is not an ideal habitat for chickens, and spending long hours in water can affect their health adversely, particularly for baby chicks.

If chickens can’t swim, can they drown when left it water? What about pools? Can chickens enter pools? If you’re wondering about the answers to these questions, you are in luck. In this article, we’re going to explore every aspect of swimming for chickens. 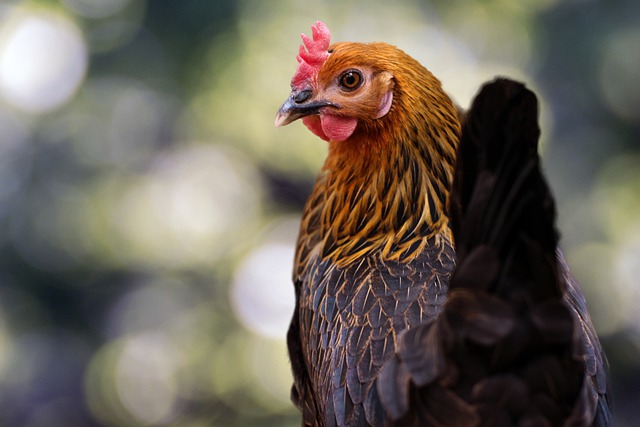 Before we discuss whether or not chickens like swimming, let us ask ourselves this: do chickens like water? If you have had a chicken for some time now, you might know the answer to this yourself.

Yes, chickens like water. Water is an essential part of their daily diet and keeps them hydrated throughout the day. Chickens need even more water during summers since they can get dehydrated easily by running around in the harsh sun.

However, just like us, chickens dislike dirty water. If they find dirt, poop, or pine shavings in the water dish, they will stop drinking from it right away, no matter how thirsty they are. This is why you should clean their water dish regularly.

Apart from drinking, most chickens love water as well. Many chicken-owners have confessed that their chickens like to be sprinkled with water hose in the mornings. You may also find your chickens standing in accumulated water, particularly in summers, to cool themselves off.

However, have you ever witnessed a chicken willingly choosing to swim in a pool? It is highly unlikely. This suggests that while chickens drink plenty of water and like to stand in it during summers, too, they are not keen on swimming in it.

Are chickens built to swim? 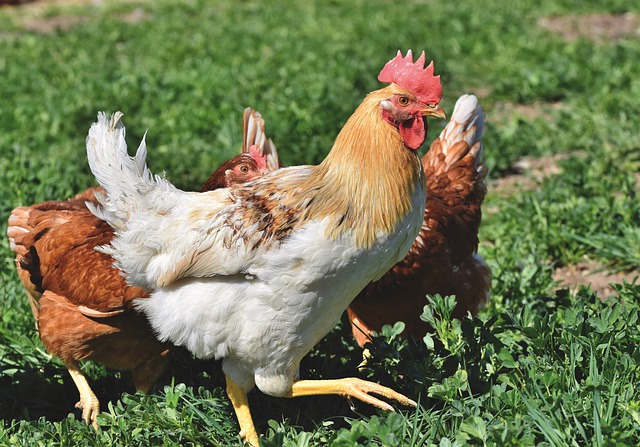 You might have noticed that the aquatic animals who live in the water have a body structure that is quite different from terrestrial animals.

This is because their bodies are suited to live, breathe, and swim in the water. They have streamlined bodies, gills to breathe the oxygen in the water, etc. Most terrestrial animals, on the other hand, are not well-suited for swimming in water.

To explain this more elaborately, let us make a comparison between ducks and chickens.

A comparison between ducks and chickens

Ducks are aquatic birds that can both walk on the land and swim in the water comfortably since their anatomy is designed accordingly. Let us look at the differences between a duck’s and a chicken’s body.

Feet – Ducks have webbed feet that make paddling in the water easier for them, allowing them to swim forward efficiently. Chickens, on the other hand, lack the webbed feet that aid swimming. They have regular, claw-like feet that are commonly found in most non-aquatic birds.

Feathers – Many people believe that chickens have waterproof feathers. However, this is not true. The truth behind it is that ducks have a special gland located near the tails, called the preen gland. The preen gland secretes oil that they rub all over their feathers to create a barrier.

This barrier prevents water from wetting their feathers, which is why they appear to be waterproof. The chickens have no such glands. Thus, their feathers are vulnerable to water and get wet quickly, making swimming difficult for them.

Moreover, ducks can ‘ideal’ themselves in the water to create a balance. Chickens can’t do this and are therefore too heavy and susceptible to sink.

Thus, we can conclude by saying that chickens lack every feature that a bird needs in order to swim in the water properly.

Just because chickens don’t have the right anatomy for swimming doesn’t mean they can swim at all. As it happens, chickens are believed to have an inherent capacity to swim from ancient times.

This seems to be a survival mechanism that is seldom put to use. Their feet, though not webbed, are quite capable of managing to paddle in the water. But they will paddle slower than ducks.

However, one major disadvantage for chickens in swimming is their feathers. Like we mentioned earlier, chicken’s feathers are not waterproof like ducks. Once the water enters their feathers, they get damp and bloated, and will most certainly sink.

Another essential factor to consider is that chickens can panic in the water. Read the next section to know more about it.

Chickens can panic in the water

Most people choose to ignore the fact that chickens have a tendency to panic in the water. While ducks, being aquatic birds, feel calm in the water, chickens react to water like a person who doesn’t know how to swim reacts on suddenly being thrust into water.

Chickens get scared of drowning, which makes drowning more imminent. Many chicken-owners have talked of incidents where chickens have drowned in merely a bucket of water. This happens because their panic gets the better of their survival instincts in the water.

Yes, chickens can float in water, but not for long. They can only float on the surface of the water for as long as their feathers have the capacity to trap air within them.

When they stay in water for a longer period, their feathers begin to soak up water and lose air. If this continues for long, they will bloat and sink eventually.

An average-sized chicken can float in water for roughly 5-10 minutes. However, the duration of their floating is heavily dependent on their struggling. If the chickens start panicking in water, they can drown earlier. It takes only one minute for a panicking chicken to drown in the water.

While the adult chickens can manage themselves in the water for a while, trying to make their younger one swim is out of the question. There are two main reasons why chicks shouldn’t be allowed to swim.

The absence of well-developed plumes

The feathers of chicks are still developing. Thus, they are not dense enough to trap air, which could allow them to float on the surface of the water for a while. As a result, it takes no time to get them wet, and then they start to drown.

The risk of hypothermia

Chicks have a weak immune system and can easily catch hypothermia when exposed to water, which is a serious threat to their lives. In many cases, baby chicks have died of hypothermia. If your chick ever falls off into water accidentally, you must dry it and put it in inside blankets immediately.

It is even suggested that when you bring a baby chick into the coop, you should replace the regular water trough with a smaller one that poses no threat to it.

Yes, certainly. Like any other animal who breathes oxygen through the air, the inability to swim in chickens can certainly lead to drowning. To add to it is their habit of panicking, which makes them drown even faster.

The myth of chickens drowning in rain

The myth of chickens drowning in the rain has been around for a long time, and many people sincerely believe it to be true. However, that is not the case. In reality, chickens do not drown in the rain.

As long as they have a shelter to run to, they can save themselves. In case they are exposed to rain for a long period, they are susceptible to catch hypothermia. But even if they die of hypothermia, it would be because of the cold and not of the rainwater.

In any case, if you are a caring pet parent, you should be extra cautious about leaving your chickens out during the rainy seasons.

Can some chicken breeds swim better than the others?

We aren’t sure about which chicken breeds swim better than the others, but we are certain that the silky chickens are the worst breed for swimming.

This is because they have a unique plume that gets wet very quickly and as a result, can drown them within seconds of being in the water. If you have silky chickens in your backyard, you need to be more careful about their safety around water.

Should chickens be allowed to enter swimming pools?

You might have seen countless videos of chickens in the swimming pool on the internet. Are you wondering whether it’s safe for your chicken to enter your pool as well? It would be best if you do not allow your chickens to enter swimming pools.

While the risk of drowning can be taken care of if you’re vigilant, there are other risks as well. We use a number of chemicals in our pools to keep them clean.

These chemicals contain sanitizers, oxidizers, and many other substances that might not be good for your feathered pet’s health.

To sum it up, we can say that while chickens have the inherent ability to swim, they don’t possess the finesse due to the lack of practice as well as the right anatomical features. Water is not the natural habitat for them, which is why they often panic when exposed to it suddenly. They can float on the surface for a while, but as their feathers soak up water, they will get heavier and eventually sink.