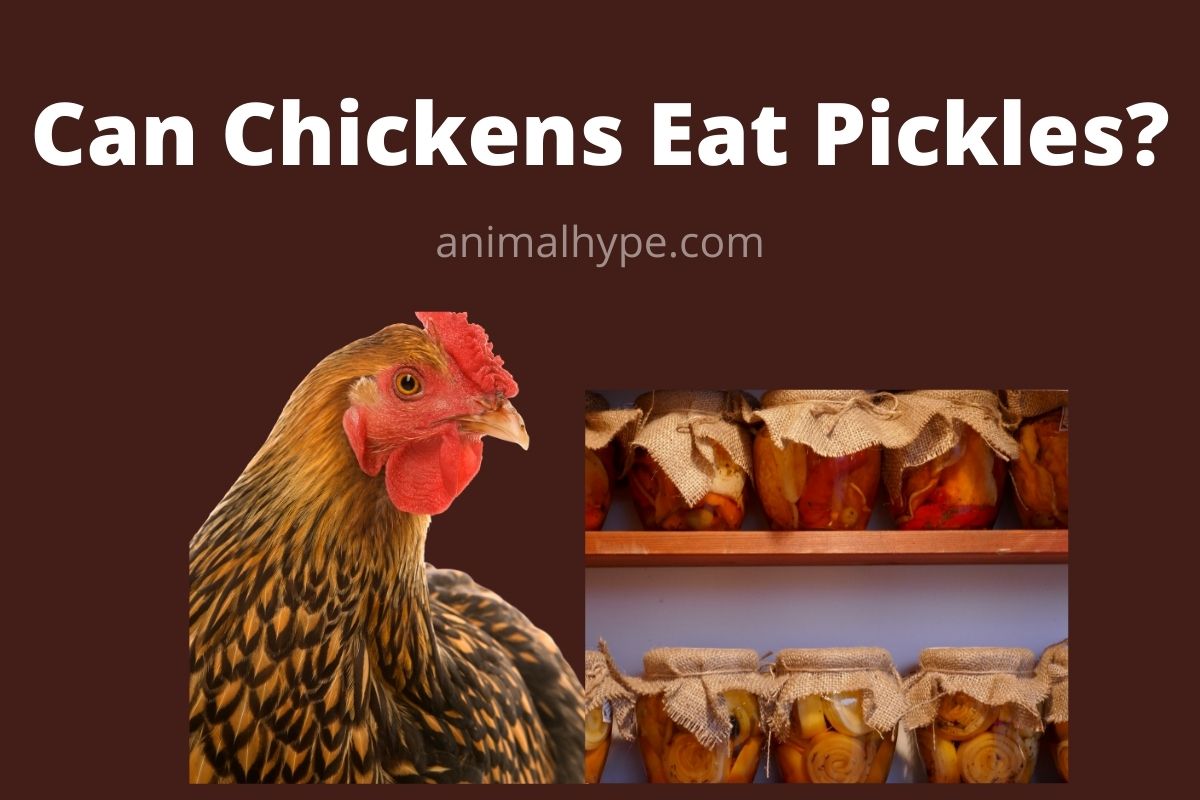 I’m sure many of you have wondered whether it’s a good idea to feed your chickens pickles. Never in my life did I ever think this would be a subject to research. But the more my mom told me how they eat pickles, the more I had to get to the bottom of it.

Can chickens eat pickles? While it is never advisable to feed your flock too much of processed foods and foods with preservatives, pickles are an occasional treat that won’t harm your flock. Some pickles have more nutrients than others, so you should consider offering healthier types of pickles to chickens.

Pickles are safe for your backyard chickens to eat as long as you’re feeding them pickles occasionally. They can cause nutritional issues down the road if your chickens are fed them every day or several days in a row.

Pickles have a long history in human civilization. Many stories revolve around them; some say that pickles were the secret to Cleopatra’s beauty, while others claim that Columbus took them on his sailing adventures to keep his sailors healthy. Earlier, spiced brine was used in the pickles; however, vinegar solutions have replaced them nowadays.

Moreover, pickles are also savored in different forms. In this article, we will discuss whether chickens can eat pickles or not. And if they can, which pickles are safer for them and which ones to avoid.

What are pickles made of?

Do you want to learn whether pickles are safe for your flock or not? The first step towards finding the answer to this question involves figuring out what pickles are made of.

Although some ingredients in different types of pickles might vary, the basic ingredients are more or less the same in every variety.

Let’s check these ingredients out:

Now, let’s see if these ingredients fit into your chickens’ diet.

Cucumbers are crunchy, refreshing veggies that chickens are fond of, and vinegar has a long history of being used as a traditional remedy for them. For ages, chicken-keepers have added vinegar to their flock water because it benefits their respiratory system.

And as far as salt, sugar, and spices are concerned, while they’re not ideal for your flock’s health, they are also not lethal to them when fed occasionally.

In other words, if your chickens seem to like pickles, there’s no reason why you can’t feed it to them in moderation.

Dill pickles are the types of pickles in which different parts of the dill plants are mixed with the cucumbers to give them a unique flavor. There are several varieties of dill pickles that have a slightly differing recipe.

Let’s explore these varieties and see if your feathered pets can eat them:

The most common dill pickle variety is the genuine dill pickle, in which whole cucumbers are mixed with dill seeds, dipped in flavored vinegar, and preserved.

Because the genuine dill pickle is a plain pickle variety, it can be fed safely to your flock.

Commonly referred to as “cukes,” overnight dill pickles contain whole cucumbers mixed with dill leaves and white vinegar. They don’t need to be preserved for a long period of time and can be consumed after storing in the refrigerator for about 24-36 hours. Occasionally, mustard seeds and peppercorns are also added to them.

Although kosher dill pickles were consumed by the Jews of Ukraine, Russia, and Poland for hundreds of years, it wasn’t until the 1900s that they were introduced in New York.

To make kosher dill pickle, cucumbers are peeled, sliced vertically, and washed. Then, these washed cucumbers are mixed with dill, garlic, kosher salt, and a few other spices.

These pickles have a salty and somewhat crispy flavor and are best served alone.

For your chickens, the kosher dill pickle isn’t an ideal pick due to the presence of a large amount of salt and other spices.

The Polish or German-style pickles were developed in the central and eastern parts of Europe, from where they were exported to different parts of the world.

Although these pickles are slightly similar in taste to the sour kosher dill pickles, both are seasoned differently. While they are traditionally preserved in wooden barrels, some manufacturers also sell them in glass jars.

Two different types of pickles fall under this category. The first one is known as “ogorek malosolny”, or “low-salt cucumbers” with either half-sour or full-sour taste depending on how long they have been preserved. The second one is called “ogorek konserwowy” or “preserved cucumber” and has a sweet and tangy flavor.

While chickens can eat all kinds of Polish and German pickles, be careful not to overfeed them these pickles. Your feathered pets might get carried away while eating them, but you shouldn’t.

When they hear the name “lime pickle,” many people assume that the citrus fruit limes are added to them, but that’s not true.

In truth, the lime used in these pickles is not a fruit but the inorganic compound of Calcium hydroxide, which is also known as “slaked lime” and “pickling lime” traditionally.

To make lime pickles, the washed whole cucumbers are soaked in pickling lime instead of salt brine to give them a crispy texture. After some time, the lime is washed off, and the crispy cucumbers are covered in sugar and vinegar, left to soak for a day. The common pickling spices might or might not be added to them.

If you’re planning to feed lime pickles to your flock, go with the kinds that do not have pickling spices and are sweeter in taste.

The cinnamon pickles are often used as a Christmas treat and are easily distinguished from the other pickle varieties due to their bright red color.

To prepare these pickles, cucumbers are peeled, sliced, and their seeds are spooned out. Then, these slices are soaked in pickling lime for over 24 hours. After a day, the lime-covered cucumbers are soaked into water for 4 hours and then rinsed off. Lastly, these cucumbers are placed in red sugar syrup and preserved for another day before they can be consumed.

Because the cinnamon pickles have candies and a substantial amount of sugar in them, we wouldn’t recommend you to feed these to your chickens.

What about bread and butter pickles? Are they edible to chickens?

They are a marinated variety of pickled cucumbers preserved in sweet brine, so they are sweeter than most pickle varieties.

They can also be prepared as refrigerated pickles instead of being stored in jars for days.

The high sugar content of the bread and butter pickles makes them highly unsuitable to your feathered pets. Even if you are sharing these pickles with your chickens, make sure to do so only occasionally.

The term “gherkin” is derived from the Dutch word “augurken” or “gurken,” which, when translated to English, means “small pickled cucumbers.”

The only difference between gherkin pickles and other kinds of pickles is that these are prepared using cucumbers which are fairly smaller in size and have a bumpy texture on their surface.

As their name suggests, the gherkin pickles are prepared using baby cucumbers that are merely 2-4 inches in length and have little bumps all over their body.

There are several gherkin pickle varieties. One of them is known as “cornichons,” a French tart pickled using vinegar and tarragon, a perennial herb of the sunflower family.

Sweet gherkins, which are prepared using pickling brine and sugar, are also quite popular among people.

Chickens can eat gherkin pickles. However, it is important to understand that they are acidic in nature and may cause any disease in the body of a chicken if consumed excessively.

Can pickled eggs be fed to chickens?

Pickled eggs are a quite popular snack served in bars, pubs, and taverns because they go great with beer.

These are very easy to prepare; all you need to do is hard boil the eggs, remove their shell, and soak them in a solution of vinegar (or brine), along with salt, spices, and other seasonings.

These eggs can be eaten after a day as well as in several months. The longer they remain submerged in the solution, the rubberier their texture becomes.

There’s no harm in feeding pickled eggs to your chickens if they seem to like its taste. If anything, it will add more protein and calcium to their body.

The problems with overfeeding pickles to chickens

While pickles are safe for your chickens as a treat, most chicken owners claim that their pets mostly ignore pickles and wouldn’t eat them unless they’re hungry. However, if your pets have grown fond of pickles, they will not mind overeating them.

If such a situation arises, it is your job to keep the amount of pickle in their diet moderated. Because pickle’s ingredients, such as salt, sugar, and other spices, might not affect chickens in small quantities but would be lethal to them in excess.

Most chicken owners know that too much salt in their pet’s diet can end up killing them. And as far as sugar is concerned, it not only disrupts their digestive health but can also make them overweight and lead to diabetes.

It’s best not to feed your flock too many processed and preservative-laden foods, but if you must give them this food occasionally, give them the healthiest kinds of pickles, including those that are fermented, or those that are unpasteurized.

The salt and vinegar in the pickle will give them a bit of a boost in their sodium intake as well.

We hope you’ve enjoyed this article about the chickens eating pickles! We know there’s a lot of information on chickens out there, but we hope that this article has been helpful for you. Please let us know what you think as well as any other info you think we should include.

Good luck with your chickens, and remember to buy them a house made out of pickles! (just kidding!)

Also, tell all your friends about it so they too can bask in the glory of chickens eating pickles 🙂