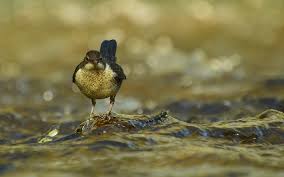 We accept the fact that such birds as ducks, penguins, grebes and related birds are capable of swimming well and diving to considerable depths, for we know they are especially constructed for this type of activity. But it does seem strange that one of the totally unrelated songbirds- the water ouzel or dipper should lead a similar existence.

Water ouzels or dippers, found in the western United States and in other mountainous areas of the world, feed primarily upon water insects and seem to enjoy diving into the water in search of them. Not only do they stroll about on the bottom of a swiftly flowing stream, but they frequently fly under water, using their wings as though they were in the air.

The feathers of the water ouzel are so thick and tightly fitting that its body does not get wet. This feather arrangement also probably explains why cold weather does not reduce the activities of these birds. They have, for example, been seen to fly through holes in the ice and to emerge some time later none the worse for their chilly bath.

Dippers are grayish-colored birds about the size of a robin. They have noticeably short tails and somewhat resemble the thrushes to which they are related. Their name probably derives from an interesting habit which the young birds have. When they are hungry, apparently feeling that they must put on an act, either as persuasion for the parent birds to feed them or as advance payment for a meal, they execute a series of squats or dips, bending their knees, squatting down and then straightening up again.