Bird-watching is trending in the state of Indiana like wildfire these days. All the bird enthusiasts here are keen on finding time from their schedule to devote to this hobby that is as adventurous as it is calming. Are you among these enthusiasts who are willing to gather as much information about the birds they spot in their backyard?

In this article, we are going to tell you everything you need to know about the different owl species you can spot in Indiana, and how to identify and differentiate between them.

There are seven species of owls who reside in Indiana; six of them belong to the family of true owls, while the seventh is the Barn Owl. Let us learn more about these owls. 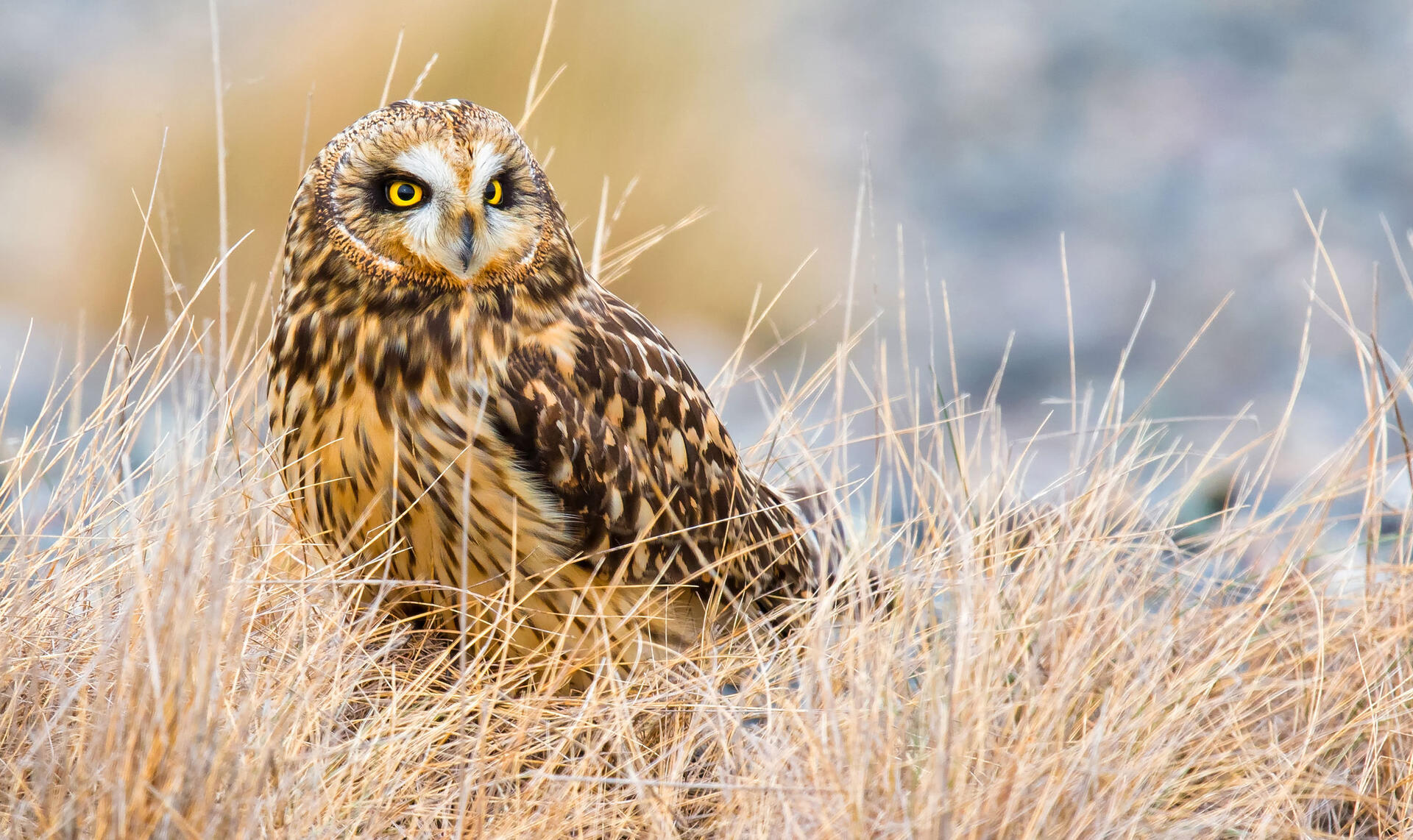 With a medium-sized body covered with mottled brown, the Short-eared owls are members of the true owl family who are known for their flame-colored feathers and mammalian ears.

Yes, these owls have ears unlike any other owl species; ears that are shaped like that of the mammals instead of birds. But you can easily miss out on these unique ears. It is because their ears are always covered with facial hair.

The Short-eared owls show their ears only when they sense a threat around them and want to appear intimidating.

Spotting the Short-eared owls in Indiana is a fairly common event for two reasons; the first being that they live here in abundance. The second reason is, these owls, unlike most of the other owl breeds, are not strict followers of the nocturnal routine and can often be seen flying around in daylight as well.

If you want to spot these owls, your ideal time should be either dusk or dawn, when they are most active. Also, since they build their nests on the ground in open regions, you are more likely to spot them around meadows and grasslands.

Another trait that sets the Short-eared owls apart from the other owls is their sloppy flight. If you see these birds in flight, you will notice that they appear more like a bat than an owl. It is because these birds have an irregular wingbeat that affects their smooth flight. 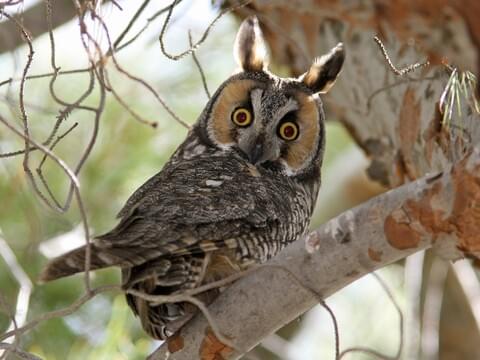 If the Short-eared owls are easy to spot, their long-eared siblings are quite the opposite. The Long-eared owls are highly secretive in nature and don’t like to be seen in areas densely inhabited by humans.

Moreover, their body is brilliantly colored to provide them the best camouflage in the woods. Another difference between these owls and their short-eared siblings is that while the latter nests in open areas, the former likes to reside in dense deciduous forests.

Although they are called “long-eared”, it is not the ear of these owls that are long, but their tufts. They are also referred to as “Lesser Horned Owls”, because their faces resemble that of the Great Horned Owls, except their tufts are slightly shorter than the latter.

Some bird enthusiasts also call these birds “Cat Owls”, because they believe that their facial features resemble that of a cat.

While the Long-eared owls tend to stay away from the human population, they don’t mind the company of their own species. They are highly social birds who live and travel in large colonies. If you want to spot these birds, you should use their calling sounds. Some of the common sounds they make are “jaiow”, “yip yip”, and a deep “whoop”.

The Barn owls don’t belong to the family of true owls, and you can easily tell that by taking one look at them. They have a pretty, heart-shaped face with pale brown patches all over their body. Their eyes are darker than most of the other owl species, with a greyish beak that turns downwards towards the edge.

The Barn owls are popular for having irregularly-placed ears that give them an edge over the other owls. The left ear of these birds is placed slightly above their eyes, while the right one is placed slightly below. This irregularity makes them one of the best hunters.

Their hearing capacity lets them locate their prey even under snow or hidden behind dense vegetation. Barns owls are probably the only owls found in Indiana who can hunt bats.

They build their nests in abandoned barns and church belfries and can be recognized by their calling sound, a long shriek sounding like “shree”. If these owls feel threatened, they make a strange, snake-like hissing sound in their defense. Although the Great Horned owls are native to the Americas, they are highly adaptable birds who can easily live in different types of climate and are, thus, found in most parts of North America.

Considered to be one of the larger members of the owl family, these owls are the heaviest owl species in Indiana. Their names are greatly deceiving, for what looks like horns atop their head are not really horns but ear tufts made of feathers. These tufts are known as plumicorns and give them a rather frightening look.

The body of Great Horned owls is colored in brown and black and appears to be somewhat like a tiger’s, which is why they are also referred to as “Tiger owls”. They have a white patch on their throat that seems to stand out in contrast with their otherwise dark body. Their eyes are large and rounded, with yellow irises and a dark cornea.

Earlier found only in thick forests, these owls have adapted quite nicely with the growing human population and can now live as comfortably in the suburbs as in the woodlands. The Great Horned owls who live in the northern parts of the United States travel south during winters, whereas those who live elsewhere are non-migratory.

The Eastern Screech owls are popular for having fake ear tufts. Unlike the other species who simply have tufts in place of ears, these owls have real ears that also come in handy in communicating with other owls. These owls do not mind the company of human beings and tend to build their nest on the top of buildings and street lamps.

However, they steer clear of regions populated by other owl species, particularly by the Great Horned owls.
Although they reside in the urban areas, you can’t spot these owls easily due to their body designed to blend in their background and camouflage.

Eastern Screech owls are strictly nocturnal and venture out only at nights. If you want to spot these birds, you can follow their distinct calling sounds called tremolo, which sounds a lot like mating frogs.

The Eastern Screech owls prefer to nest in natural tree hollows and old woodpecker holes. They have two morph variations: gray morphs and rufous morphs. Both sexes look alike; only the females are slightly larger than their male counterparts.

Although their calling sound is a typical “toot toot toot”, the Northern Saw-Whet owls are named after a special sound they make when they feel threatened by a predator. This sound is similar to that of a saw being sharpened or whetted; hence, the name. These owls are endemic to North America.

These owls are among the smaller members of the true owl family and are no larger than an American Robin. Because of their small size, they can easily find cover and are rarely spotted by humans.

However, their small size also makes them vulnerable to the larger birds of prey, such as hawks and falcons. Some of the large owl species have been known to prey on them as well.

The Northern Saw-Whet owls lack the ear tufts just as the Short-Eared owls and appear rounder for it. They are selectively migratory; some of them move to the south during winters, while the others remain in the same habitat throughout the year. 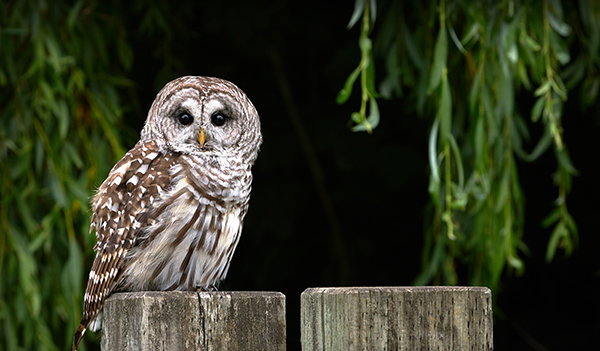 The Barred owls are one of the larger members of the true owl family who are endemic to the eastern regions of North America. However, you can also find them along the west coasts, where they are considered to be an invasive species.

These birds choose their habitat in thickly dense forests so that they can sleep through their days uninterrupted. They usually prefer to nest in natural tree hollows but can also encroach an abandoned nest if they come across one.

Barred owls are non-migratory birds who appear to be duller than any other owl species you can find in Indiana. Most people refer to them as “Hoot owls”. Their body is rounded with a head that seems rather large for them.

Just like the Short-eared owls and the Northern Saw-whet owls, these owls don’t have ear tufts as well. They have completely dark eyes, which sets them apart from the rest of the true owls of the United States.

In the article above, we looked at seven different species of owls who reside in Indiana. There is, however, another owl species that have recently been recorded to spotted at some places.

This species is of the Snowy Owls (Bubo scandiacus). Endemic to the arctic regions of North America, these owls are inhabitants of extremely cold climates, as their name suggests. However, there have been a few rare sightings of these owls in parts of Indiana.

If you ever spot one around you, you’d be able to distinguish it from other owl species easily because of its completely white body.