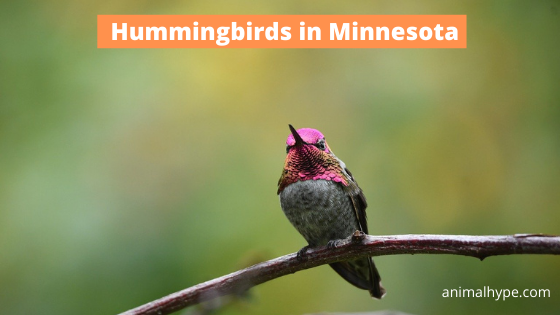 Did you know that the state of Minnesota is nicknamed “The state of 10,000 lakes”? It is because there are more than 12,000 lakes throughout the state. Another remarkable thing about Minnesota is its population of birds. However, today, we are going to focus on an individual species of birds found in Minnesota: the hummingbirds.

There are as many as 340 species of Hummingbirds in all of the Americas, out of which 17 species can be found in the United States. 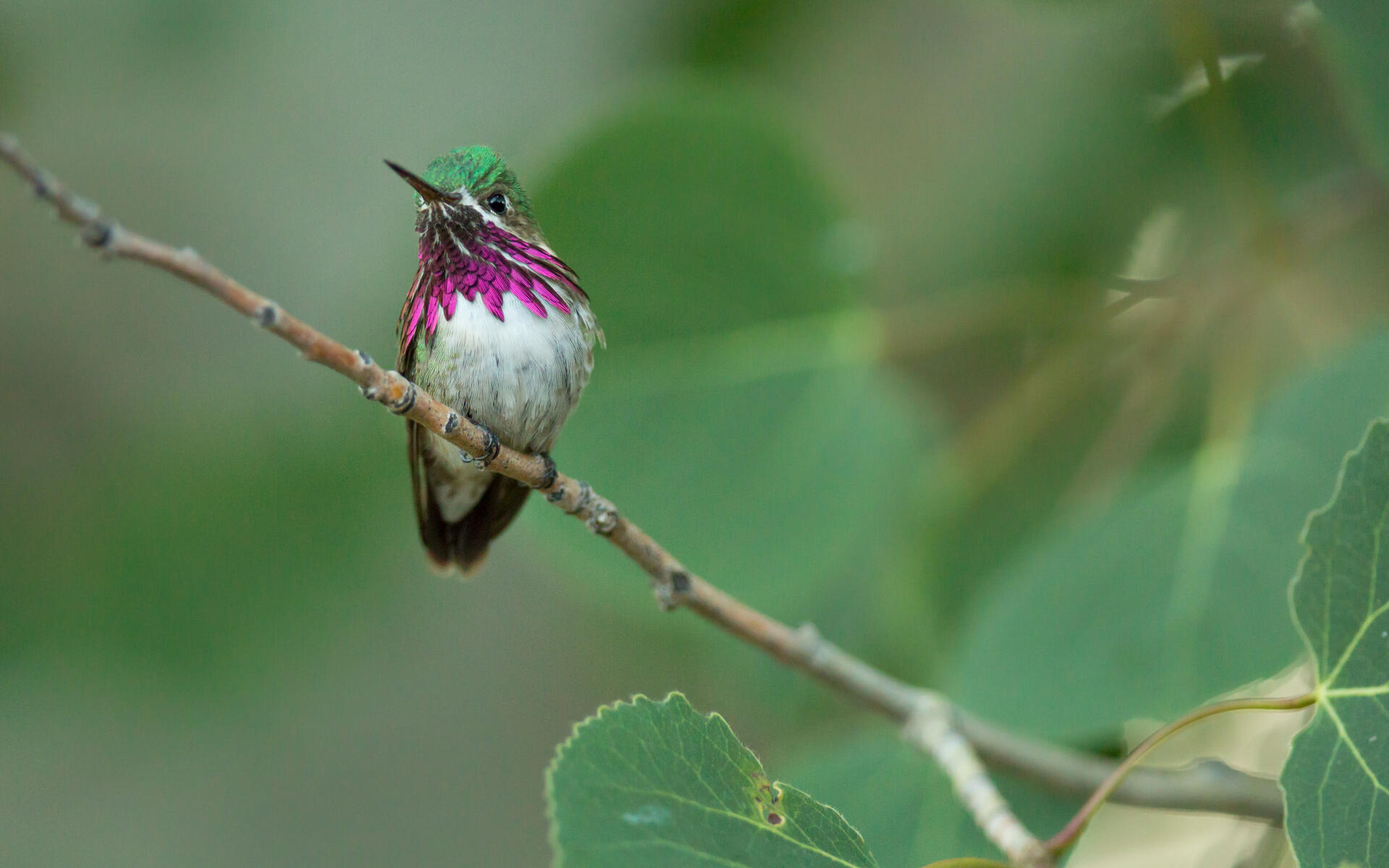 Although all hummingbirds are expected to be small in size, the Calliope Hummingbirds are surprisingly small, even by their standards. These hummingbirds are named after a character from Greek Mythology: Calliope, who happens to be the muse of epic poetry and eloquence.

These hummingbirds are the smallest hummingbird species in the United States. The only hummingbirds smaller than them are the Bumblebee Hummingbirds that are not native to the country but only appear as an accidental vagrant here.

Breeding in montane forests, alder and willow thickets, and meadows, these birds are not the permanent inhabitants of Minnesota but only happen to pass by during their migratory season.

Calliope Hummingbirds have glossy green crown and back with white underparts. The males have wine-red streaks on their throat, which are replaced by darker streaks on the females and juveniles.

While the flanks of the males are green, females have a washed pink tint to their flanks. Both the sexes have a dark tail, but only the female’s tail is tipped with white. Calliope Hummingbirds are somewhat similar to Rufous and Allen’s Hummingbirds; both of them are considerably larger in size to be confused with the former.

The Calliope Hummingbirds are known for their remarkable courting manner. While courting the females, the males flap their wing repeatedly to produce a buzzing sound, which in turn attracts the females to them. The males are also popular for being promiscuous, mating with more than one female in the breeding season.

These birds have, in fact, been named after the Duchess of Rivoli, Anna Massena. Anna’s Hummingbirds are also related to Costa’s Hummingbirds, although the two are more biologically related.

The chest and belly of Anna’s Hummingbirds are colored in pale grey, while their back appears an iridescent bronze-green. Their flanks are green, with a long, straight, and slender beak. Both sexes have a crimson-red throat, but the male’s throat is brighter and more prominent than their female counterparts.

To behold their throat at its full glory, you must catch a glimpse of it in bright sunlight. The males also have a red crown, making their species the only red-crowned hummingbirds in entire North America. The crowns of the females, as well as juveniles, are dull green with a grey throat beneath. While the males have a forked tail, the tail of the females is rounded and has white tips.

Anna’s Hummingbirds are not permanent residents in the state of Minnesota. However, they have been spotted here on several occasions outside of their breeding season. It is not wrong to assume that Minnesota must fall in the way of their migratory destination.

Among the Hummingbirds, Anna’s are of the kind who aren’t shy of humans and can easily approach your backyard feeder if you have put out some sugary waters. Brightly-colored flowering plants are another good way of drawing them in.

The Rufous Hummingbirds are one of the smaller hummingbirds who are known for their remarkable flight skills witnessed during the migratory season.

They can live in mountainsides, forest edges, and open areas and are the only hummingbird species who can travel the farthest towards the north. For building their nests, they prefer conifer trees or shrubs. These birds are not endemic to Minnesota but are often spotted in the state outside of their breeding season.

The Rufous Hummingbirds have a reverse sexual dimorphism, wherein the females are larger in size than the males. The male has a rufous face and neck with white breast and underparts.

Their flanks and tails are rufous as well, with an orangish-red patch on their throat. The females, on the other hand, has a mix of white, green, and orange feathers on their throat, with a dark, white-tipped tail and rufous rump.

These hummingbirds feed on nectar, small insects, and spiders. However, due to their small size, they also stand the risk of becoming prey to insect-eating birds and animals. The International Union for Conservation of Nature (IUCN) included their species in the Near Threatened List in 2018. Although the Ruby-throated Hummingbirds are fairly easy to identify in Minnesota, where the population of vagrant hummingbirds is quite large, it can be difficult to point these hummingbirds out.

There are two significant features of the Ruby-throated Hummingbirds using which you can recognize them instantly. The first is, as their name suggests, their ruby-colored throat. This trait is prominent in the males since the females have a much paler streaking on their throats.

The second feature is their bill, which is black, long, and as thin as a needle. It has a slight downward curve, which can is noticeable only upon closer examination. The females, who are slightly larger than their male counterparts in size, have longer bills as well.

The males have a metallic green head with greyish-white underparts. Their wings are dark in color, with a forked tail that has a violet sheen.

On the other hand, the body of the females is white with dusky streaks all over it. Their feathers have streaks of green, black, and white, with a notched tail. Like other hummingbirds, the Ruby-throated Hummingbirds also have a main diet of nectar. They prefer to drink the nectar from flowers that are colored in bright yellow, orange, and pink. The Costa’s Hummingbirds have been named after Louis Marie Pantaleon Costa, the French nobleman. These small Hummingbirds are known to inhabit the western parts of the United States and Mexico.

Although, outside their breeding season, they travel to different states such as Canada, Alaska, and Minnesota. They are closely related to Anna’s Hummingbirds.

Although Costa’s Hummingbirds have a wide range of habitats, they prefer to live in gardens and brushy desert areas. These birds are traditionally migratory; however, if they can find a temperate climate and sufficient food resources in a particular area throughout the year, they will avoid traveling even in their non-breeding seasons. The main reason behind their movement is the depletion of nectar and a climate that seems too hot for them.

In winters, when they face a lack of nectar from flowers, these opportunist birds turn into little sapsuckers and feed on tree sap from holes in trees made by the real Sapsuckers. The song of Costa’s Hummingbirds is loud and has a tinkling note to it. It sounds somewhat like “zing zing zing”.

The females are much more vocal than their male counterparts. You will only hear a male call when they feel threatened or during the courtship season. 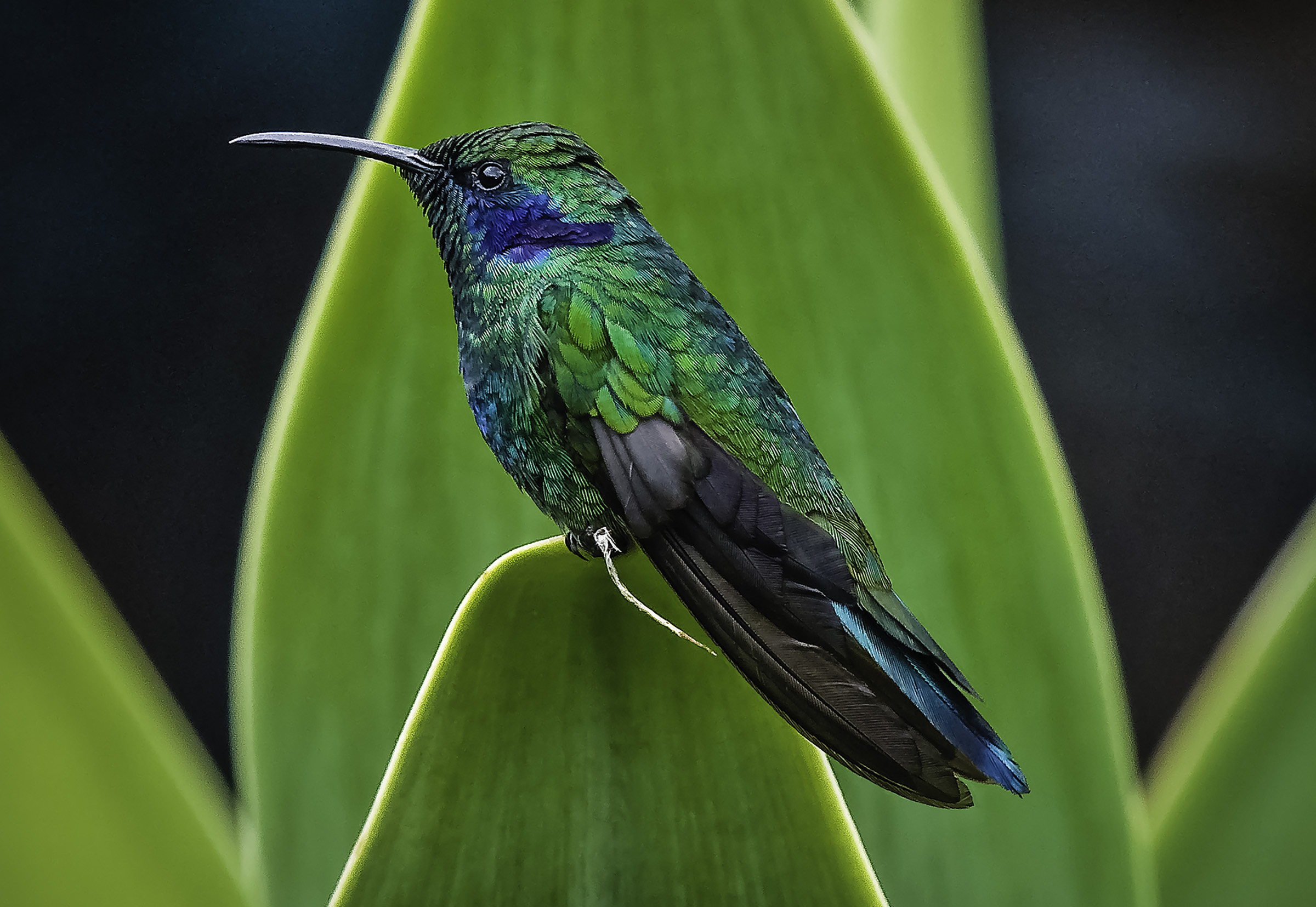 The Green Violet-ears are also referred to as “Mexican violet-ears” in many parts of the United States due to their abundance in Mexico.

Although these colorful hummingbirds are residents of Central America and Mexico, they wander around a lot with changing seasons and are, thus, also found in Missouri, Georgia, Florida, Minnesota, Kentucky, and California. Some of them also travel as far as Canada.

The Green Violet-ears appear much as their name suggests. The males have a grassy green upper plumage with an iridescent blue head and back. Their rump and belly have a bronze color with a notched, dark blue tail that appears squarish.

The females are not much different than their male counterparts in appearance, only they are slightly duller and smaller in size. The juvenile birds are way duller than the adults and have an olive-green plumage in place of grassy-green. The Green Violet-ears are vigorous singers whose song sounds somewhat like “cheep chut chut, chip cheet”. Their calling sound is a sharp “chut”.

Green Violet-ears prefer to drink nectar from the flowers that have the highest sugar content. Once they find such plants, they guard it aggressively, protecting it against other hummingbirds. You can also find them hanging on a flower while they are feeding on it. 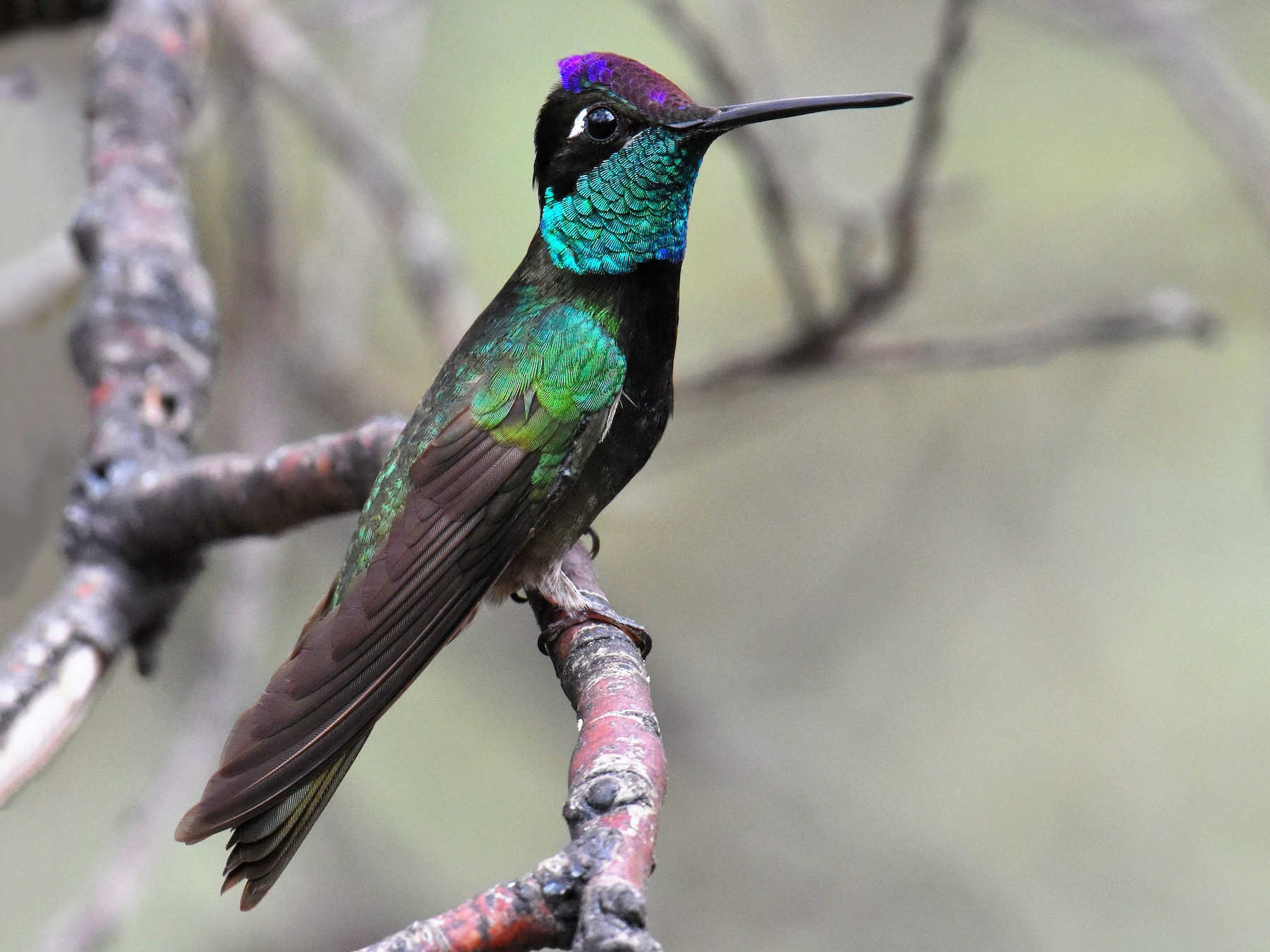 Among the Hummingbirds, the Rivoli’s Hummingbirds are one of the larger species which were named in honor of the Duke of Rivoli, Victor Massena. Because of their brilliant coloration and dramatic size among the other Hummingbirds, they are given the name of “Magnificent Hummingbirds”.

These Hummingbirds prefer to inhabit mountains and are commonly found in West Texas, south-western New Mexico, and south-east Arizona during the breeding season. It is their younger ones who are quite the nomads and are seen in a number of states, including California, Utah, Alabama, Colorado, Arkansas, Georgia, Minnesota, and Wyoming.

At first glance, the Rivoli’s Hummingbirds appear to be dark. However, to watch them in sunlight when all their brilliant colors are revealed is a true delight. They have a long, black bill that has a very slight curve. The males have bronze-green upperparts that become more bronze on the lower belly, with a black-tipped tail.

Their crown is violet, with a bright bluish-green sheen on the throat. They have a small white spot behind their eyes. The females have bronze-green upperparts as well, but with dull grey underparts.

Out of all the 7 Hummingbird species mentioned above, none are endemic to Minnesota. However, to the delight of all the bird-watchers, they are a fairly common sight across the state. And that’s not it; you can easily attract these magnificent hummingbirds to your backyard as well. All you need to do is to add a little sugary water in your feeder every day and plant some bright, flowering plants in your garden, and they will come running (or rather, flying).