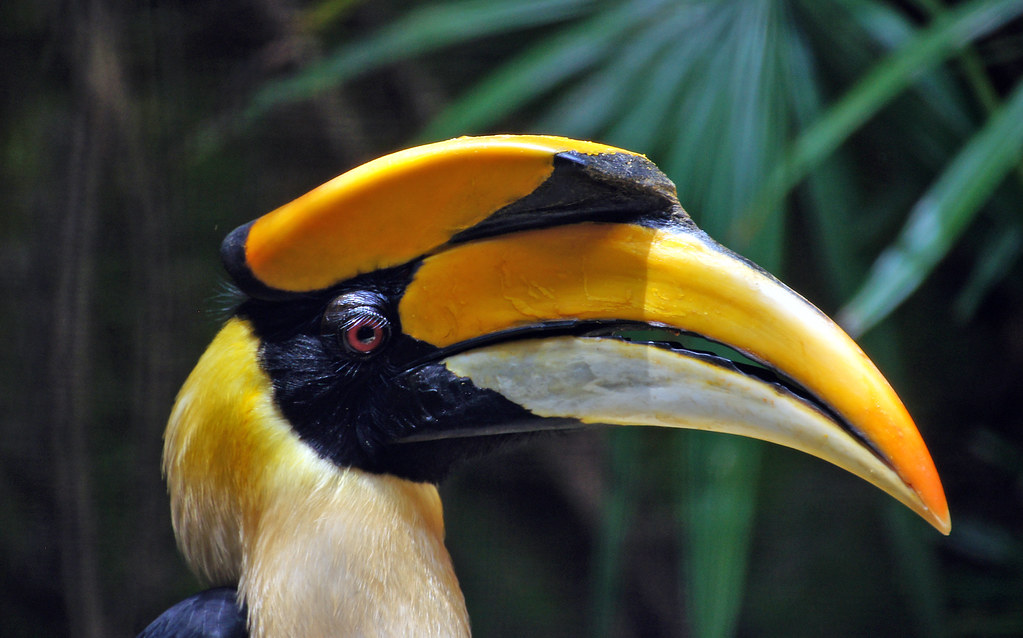 The nesting habits of some of the hornbills are about as remarkable as any to be found among birds.

When a pair of hornbills have the urge to build a nest, they find a hollow tree with an opening large enough to admit the female. She builds a nest inside the hollow, while the male gathers mud and debris and cements up the entrance, leaving only a small opening through which he can feed his mate.

One to several eggs are laid, depending upon the species of hornbill, and while the female is incubating the eggs and rearing the young the male brings her food regularly. He literally runs himself ragged: by the time the female and the young emerge from the hollow, the male is a skinny and bedraggled-looking specimen.

If he should be killed during the nesting period, the female and her young probably would not starve in their prison, for it has been reported that other male hornbills in the vicinity come to the rescue and take over the duties of the unfortunate spouse.

This strange nesting habit is of considerable importance in the life of the hornbill family, not only because the eggs or young are thus protected from hungry enemies, but because during the nesting period the female is incapable of flight. While she is incubating the eggs and rearing the young, she sheds her feathers and grows a new coat. When she at last emerges from her prison, she is resplendent in brand new clothes, an extreme contrast indeed to the poor male who does not regain his former neat appearance for many days.

Hornbills are large birds found in India, the Malay Peninsula and adjacent regions. They have big bills or beaks, and in some species a large crest rises from the base of the bill. Noticeable eyelashes are present, a feature not common among birds. The bills, despite their size, are not so heavy as they appear, since they are at least partially hollow and therefore relatively light in weight. One species, however, has a large, solid bill, which is so hard that -it has been used for carvings in place of ivory. In some regions the bills of these birds are so much in demand for love charms that the bird is exceedingly rare.