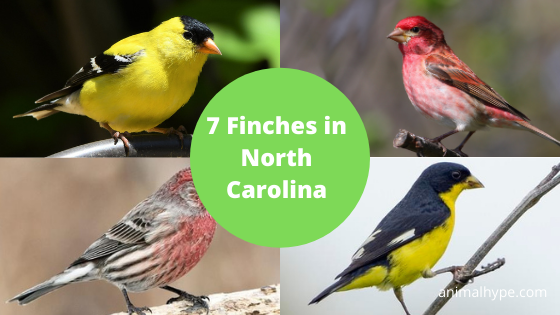 Our planet boasts a wide variety of finches to explore. Arguably one of the most alluring and vibrant birds out there, Finches belongs to the Fringillidae family. Despite their widespread population throughout the globe, these birds essentially inhabit the Northern Hemisphere, especially the lands of North Carolina.

One of the most interesting things to know about these tiny creatures is that they are incredibly social and love chirping with their friends from different species! Finches are essentially vegetarian, feeding mostly on nuts, seeds, and fruits.

Moreover, these songbirds have a penchant for hovering in the Carolina sky in flocks with their euphonious singing voices.

So, if you are a birdwatcher seeking perfection, here is a roundup of the most commonly found Finches in North Carolina! 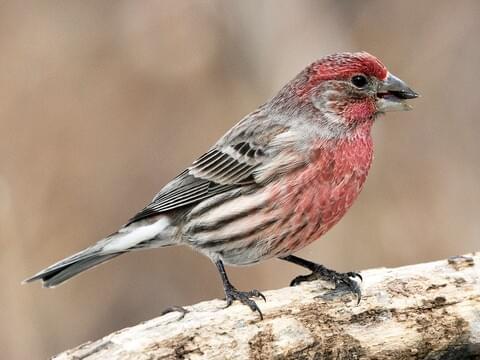 The House Finch is a small-bodied bird with elongated, flattened heads and large beaks. They bear short-sized wings that make the tail appear quite long in comparison. Many species carry distinctly notched tails, but these have a moderately shallow notch in their tails.

The adult male House Finch varies greatly in the intensity and shades of red. They are rosy red with the color, which is equally bright around the crown, breast, and face. The belly, back, and tail are streaky brown. Some males possess yellow or orange-colored bodies too. When soaring, the reddish bump on their bodies is conspicuous.

In contrast, the adult females are drab grey-brown with blurry streaks around the underparts. Furthermore, they also lack striking facial patterns, unlike their male counterparts, and feature a more diffused patterning across their bodies. You can easily locate a House Finch in suburban settings, brushy field edges, deserts, and open woods. Many bird-enthusiasts have also spotted them at backyards and city parks.

They are even known to sing a jumbled warbling of short notes in the neighborhood. Their melody often ends with an upward or downward slur that lasts around 3 seconds.

So, next time you hear such hymns, you can expect these gregarious birds to visit your feeders or perch high on nearby trees. These birds tread slowly and rest still while shelling seeds by crushing them with brisk bites. Like most other finches, their flight is bouncy.

Not really purple, but more with an old-rose body, the Purple Finch is common in the North but quite rare across the Rocky Mountains. The males are suffused with raspberry red on their breast and head. When set against the House Finch, these birds lack defined streaks on sides and are more vibrant, especially on the wings and back.

Females and first-year males bear contrasting head patterns and pale eyebrows. They also feature darker cheeks, a whitish eyestripe, and a deep line that runs down the side of their throat.

Among the range of small-sized forest birds like kinglets, nuthatches, and chickadees, Purple Finches are relatively larger. They possess powerful, conical beaks that even overpower the dimensions of a sparrow. Their tail appears short and is distinctly notched at the tip.

These birds mainly breed in coniferous forests or mixed deciduous woods. During the winter season, they descend to feed on seeds from stalks in weedy fields and plants. You can spot Purple Finches across a wide variety of trees and habitats, including forest edges, shrublands, and old fields.

Moreover, they will be harder to locate since they forage high on trees. When migrating, Purple Finches travel in flocks by day. Their migration is spread over a substantial period during both spring and fall. The flight of these birds is undulating. Jabbering clouds of green, yellow, and black, the Lesser Goldfinch is a tiny bird that is easy to overlook until you learn its twittering and chiming call. Bird enthusiasts admire them for their complicated melody, which typically contains snippets of other raptors’ songs.

Their black-colored conical bill is somewhat stout yet sharply pointed. They bear elongated black wings with a single white wing-bar and a patch positioned at their base. These birds possess a small-sized head, short notched tail, and a black or green-colored back.

Females, on the other hand, appear similar to the American Goldfinch. They feature yellowish underbodies, olive-colored backs, and a pair of black wings striped with two white wing-bars.

These species gather in cottonwood, scrubby oak, and willow habitats. Additionally, you can expect them to pay you a visit to suburban areas for water and kernels. Lesser Goldfinches are primarily known to consume plant seeds belonging to the sunflower family.

Small flocks of Lesser Goldfinches are also spotted in streamside trees and weedy fields. They assemble in large groups of up to a hundred finches at a time. The preferred food for this species is grains and seeds.

Their flocks are known to unite with other species of songbirds, particularly at bird feeding locations. Some of these birds are Pine Siskins, Lark Sparrows, House Finches, Western Birds, and White-crowned Sparrows, to name a few. A well-known summer sighter is the handsome American Goldfinch, gliding over a meadow and flashing golden under the sun. Also known as the Wild Canary and Eastern Goldfinch, these migratory birds range from the south of Canada to North Carolina during the breeding season.

These are the only raptors in their subfamily that undergo a complete molt. The males feature a bright yellow body in summers and muffled olive shade during the winter months. Females have a dull-yellow body that brightens a little during the summer months. You can identify them by their conical bill, wing-bars, notched tail, and absence of streaking.

These active and acrobatic birds are adapted with a conical beak that helps them consume seed heads. They boast a pair of agile feet that grasp the stems of seed heads while feeding occurs. They are predominantly social in nature and assemble together in groups when migrating. Also, they might act territorially while constructing their nest, but this hostility is short-lived. The American Goldfinch is a monogamous species and births a brood every year.

This species is greatly benefitted by human activity. You can find them in residential settings as these birds are often tempted to visit bird feeders. This increases their chances of survival across urban landscapes. They often flock with Common Redpolls and Pine Siskins in weedy fields, roadsides, cultivated areas, and orchards.

American Goldfinches are among the sternest vegetarians in the bird fraternity, choosing an entirely vegetable diet and only accidentally taking up an occasional insect.

Ofttimes, Brown-headed Cowbirds lay their eggs in an American Goldfinch’s next. Although the eggs may hatch, seldom does the nestling survive beyond three days. The cowbird offsprings cannot survive on the all-seed diet that the goldfinches feed their chicks. 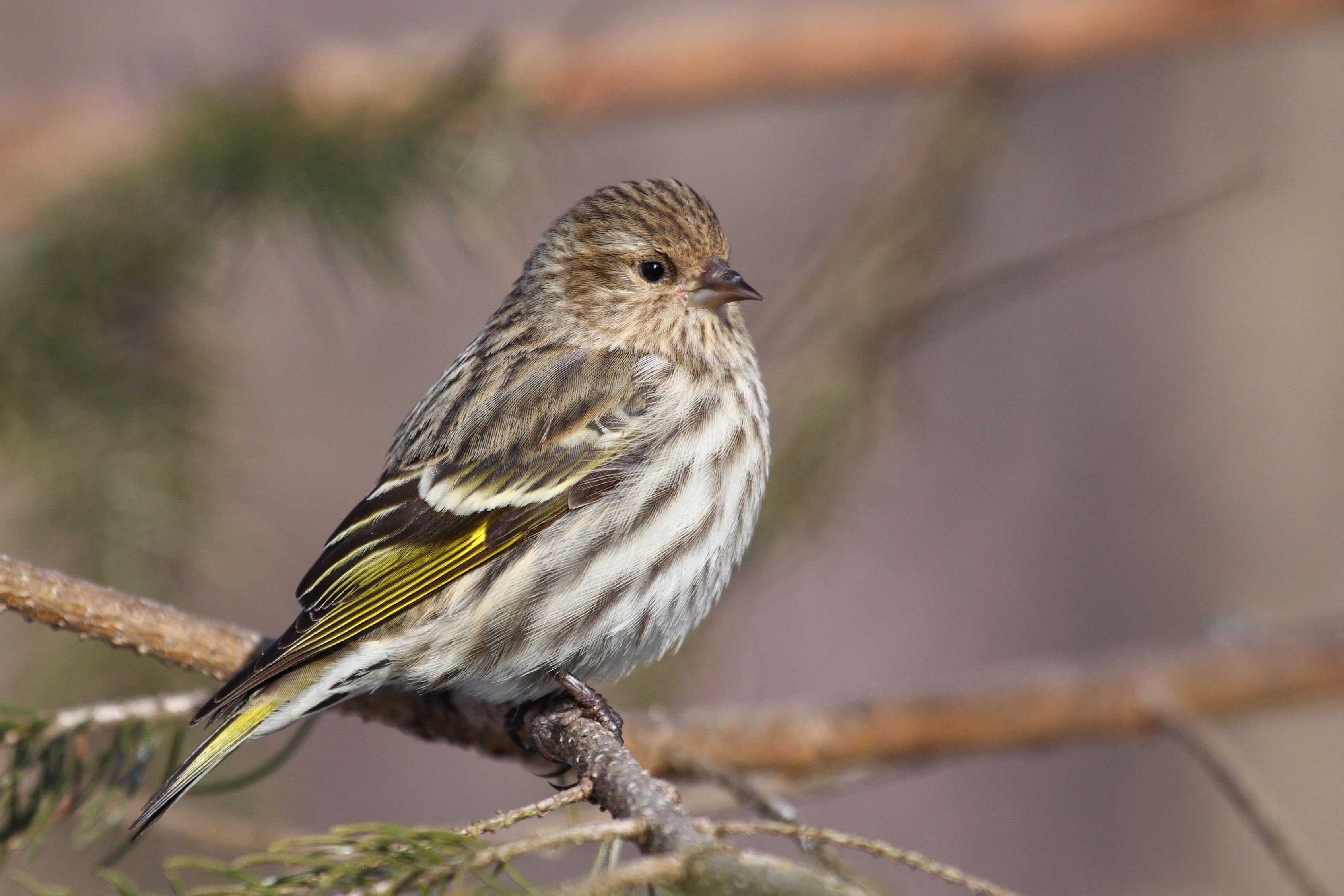 Though patterned like a sparrow, the actions, shape, and call notes of a Pine Siskin reveal that this bird is a goldfinch in disguise. These are extremely small songbirds creature with short, notched tails and sharp, pointed bills. Their uniquely developed bill is far more slender than that of most finches.

Pine Siskins bear an entirely brown-colored body with multiple streaks and subtle yellowish edgings on the tail and wings. Bursts of yellow may erupt as they take flight, mate, or flutter at branch tips.

While males are brown, their underparts are whitish with coarse dark streaking. Females are fairly similar to males, but the yellow in their tail and wings is greatly reduced.

After nesting in the coniferous forests, these birds head out to semi-open areas where they wander in twittering flocks. Often, they descend on thistle territories or wild sunflower fields. There, they cling to dried flower heads and feed on seeds.

During winters, these birds often visit birdfeeders. They are gregarious and forage in tight flocks, mostly with the goldfinches. They twitter incessantly to each other, even throughout their undulating flight. They also prefer staying in evergreen or mixed evergreen and deciduous forests with open canopies.

Even though surveys suggest a slight decline in the overall population in the past few years, this species of finches is widespread and abundant throughout North Carolina. 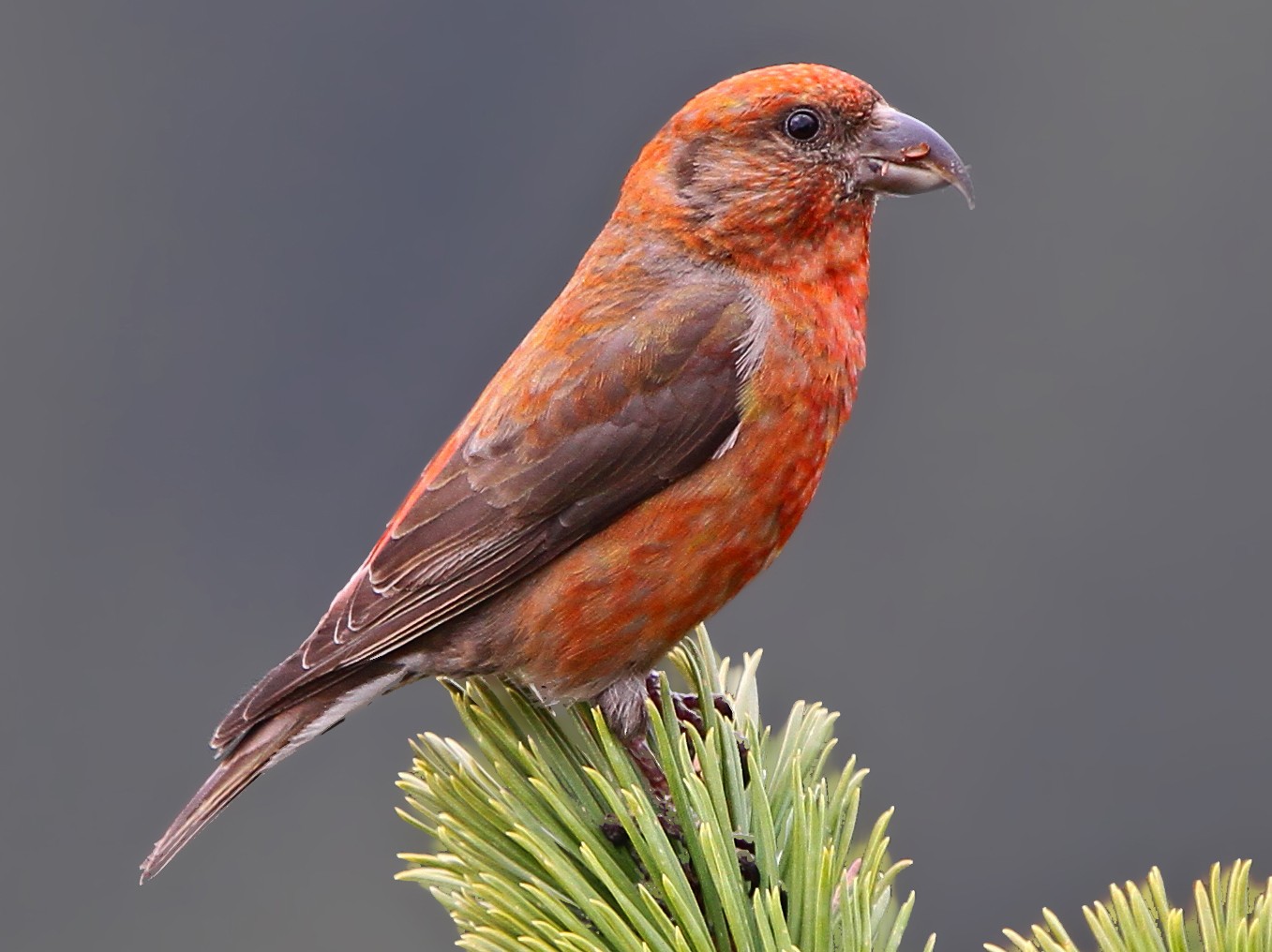 The Red Crossbill is a fascinating finch that forages on nutritious seeds in hemlock, pine, spruce, and Douglas-fir cones. These stubby and tiny nomads are often spotted by their hard kip-kip call notes as they flutter overhead across the evergreen forests. In North Carolina, they are quite variable, ranging from small-billed raptors to large-billed ones.

Research suggests that there may be as many as eight species of Red Crossbills spread throughout North America. Although scientists have been baffled over how to classify these similar-looking birds, slight differences in call notes are apparently sufficient to keep them from confusing. Moreover, several of their kind also occur in the same areas without interbreeding.

These fascinating finches of coniferous woodlands carry specialized bills that allow them to break into tightly-locked cones. This feature gives them an upper hand over other finch species. These birds nest whenever and wherever they locate abundant food and sometimes even wander far beyond their usual range.

The adult males have brick red or orange overalls with a darker tail and wings. These stocky, medium-sized creatures feature a notched tail and a unique, twisted bill that crosses when closed.

Females, on the other hand, mostly bear yellowish underparts and brown or olive-brown upper bodies. Young Red Crossbills are brown above, with pale brown streaks below. These are nomadic in nature and rarely visit birdfeeders. 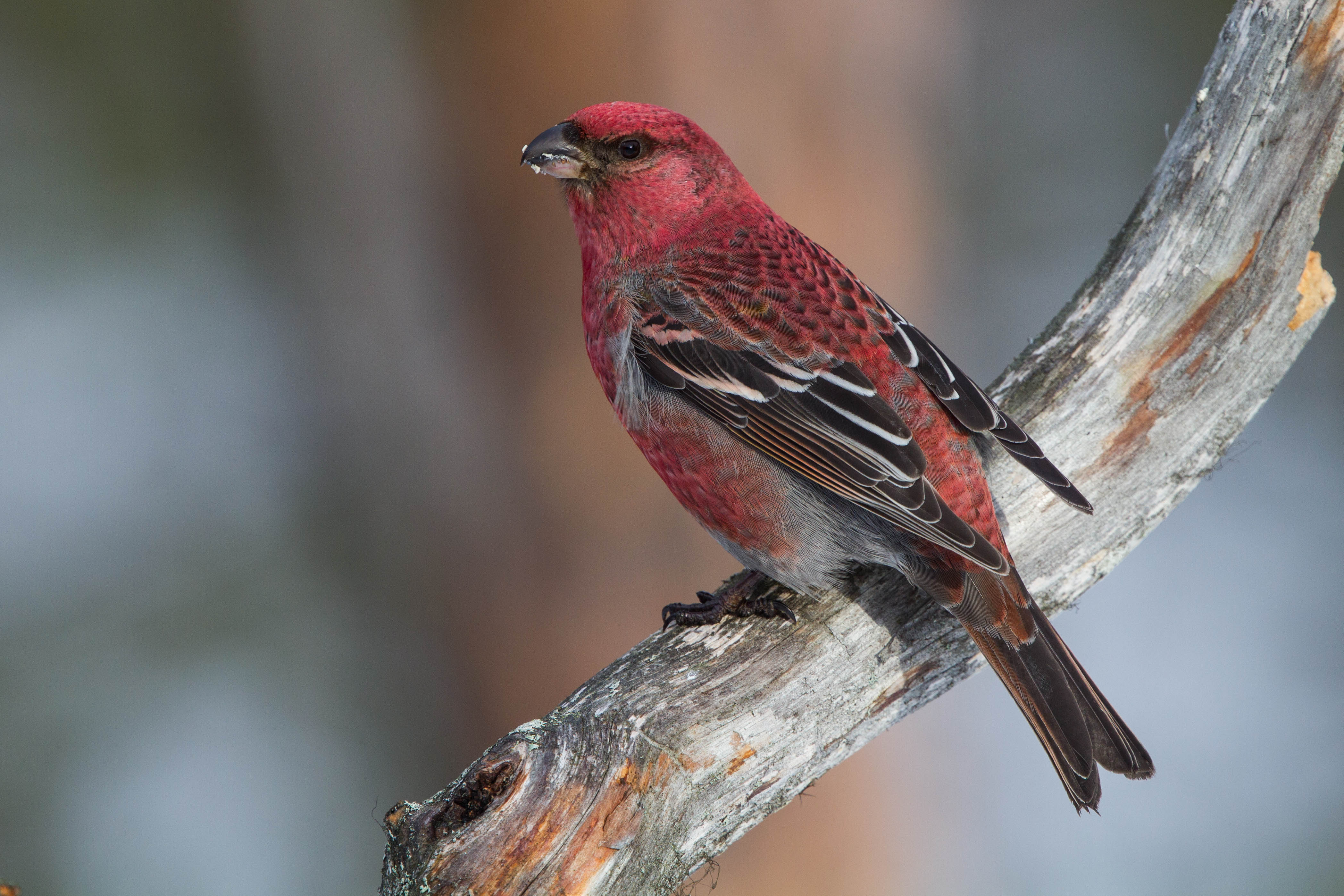 The Pine Grosbeak is a plump, large, and heavy-chested finch with a rounded head. These boreal birds are slightly uncommon but widespread in fir and spruce woods of North Carolina. They are absurdly tame, permitting a close approach. Since these birds are known to sit motionless as a birder treads by, it’s easy to overlook them in dense coniferous forests.

The grey-colored bodies of Pine Grosbeaks are decked out in yellow on males and pinkish reds on females. Young males are not so brightly colored, but they are still subtly pretty with their grey bodies and yellow, olive, or burnt-orange hump and head. They conveniently crush the seeds they feed on and nip off tree buds and needles through their thick, conical bill, which is much stubbier than that of other finch species. Their tail is elongated and slightly notched.

Pine Grosbeaks hop on tree branches or on the ground to grab fallen seeds. You can identify the males by their warbling song from treetops during the breeding season. These birds mostly breed in open areas and pay a visit to bird feeders during winters. They also form small flocks and fly together in search of fruits and seeds.

These birds consume a wide variety of plants, but it can be challenging for their nestlings to digest all that vegetation. Hence, instead of feeding them the plants directly, they regurgitate a paste of vegetable matter and insects, storing them in pouches on the lower end of their jaw on either side of their tongues.

Although the Finch family is one of the largest families to exist, these birds are one of the littlest creatures in the world! Like parrots, Finches don’t talk and are hands-off creatures. Yet, they delight and amuse the birders with their aerial antics and magnificent vocal capabilities. This was all about the major highlight Finches in the state of North Carolina.

Now you know that North Carolina is an exceptional bird-watching destination in the United States. And, if you are an avid birder, you simply cannot miss out on it!