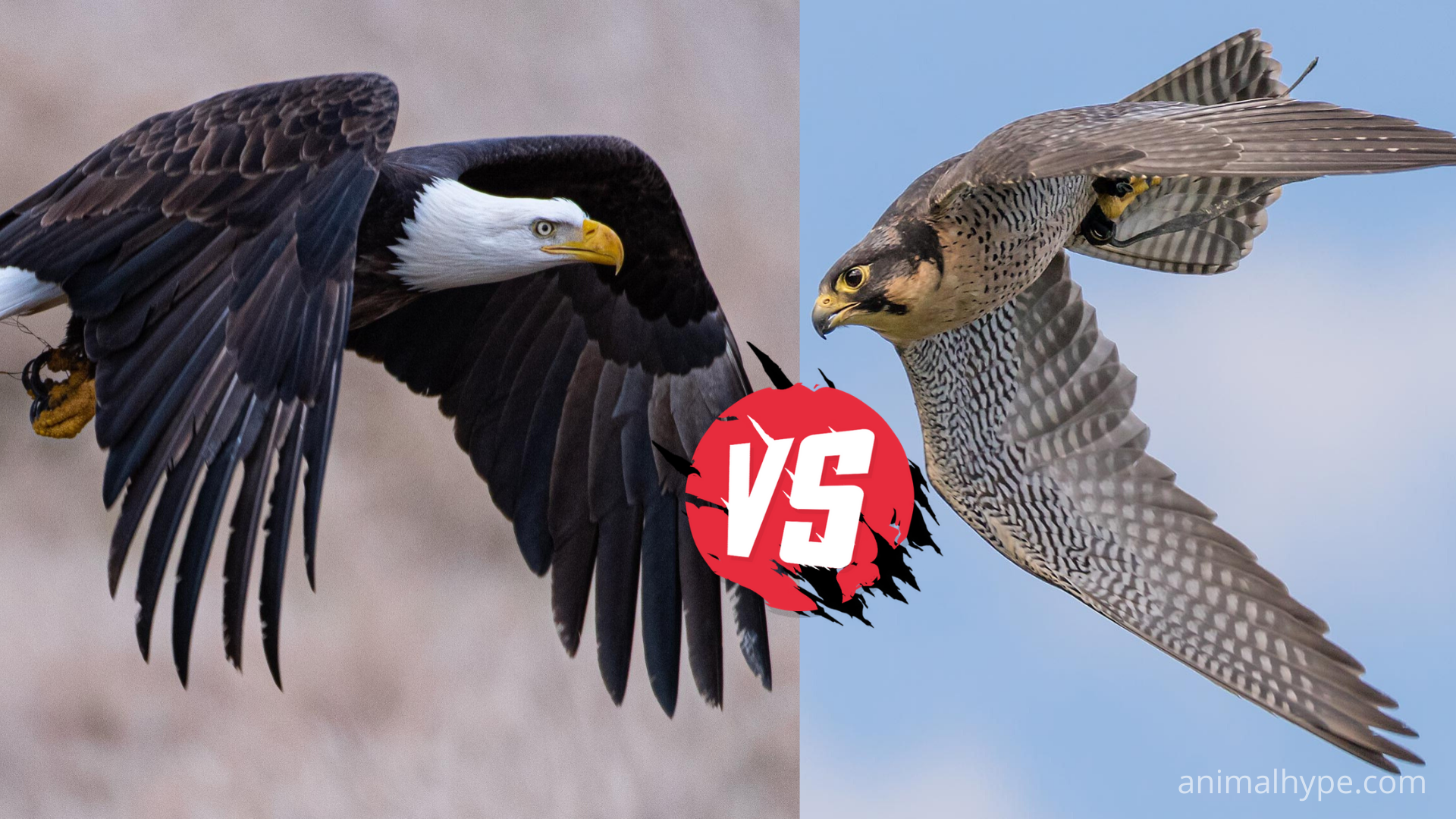 Bird-watching can be a very enriching experience if done right. Birds in the sky are beautiful to watch, and each bird has its features that set them apart from others.

While there are a lot of birds in the sky, confusion might arise when birds look similar to one another. One such confusion exists between an Eagle and a Falcon.

Both these birds look majestic while flying. From a distance, one might conceive an Eagle for a Falcon or vice-versa because of the big wings and a similar body structure.

However, these two birds are different from another in a lot of ways, if observed closely and carefully. Other differences encourage you to have clarity between these two birds.

Eagles are stronger and bigger in size when compared to falcons. Their wing structure is also different. Falcons have long and sharp-pointed wings, whereas eagles have wide rounded wings. In comparing the eye color, eagles have pale yellow eye color whereas falcons’ eyes are dark brown.

While the eagle has one of the best eyesights, the falcon is considered the world’s fastest animal. The eagle can have a size of up to 1 meter, but a Falcon can only have a height up to 60cm. Eagle has strong claws; a Falcon has a special tooth in its beak.

Several specifications range from size, color, the family they belong to, their behavior that sets these two birds very different from another. While it is a common trait for humans to confuse themselves, the following details will enable one to spot the differences quite easily.

An eagle is a large bird of prey belonging to the family of “Accipitridae.” There are around 60 species of eagle, widely spread around the regions of Eurasia, Africa, North, Central, and South America, and Australia.

A Falcon, on the other hand, is also birds of prey but belongs to the family of “Falconidae” and genus, Falco. There are around 40 species of falcons and are widespread throughout the world except for Antarctica.

While eagles and falcons are both birds of prey, their hunting techniques are different.

Eagles have heavy heads and beaks. The smallest of the eagle in its family also has long and broad wings and is faster than other birds outside its family.

The eagles have hooked beaks that enables them to pull apart the flesh of the prey. Their legs are strong enough to catch prey and make sure it doesn’t fall from the grasp. Their talons (claws) are also pretty strong that can kill the prey as soon as it grasps with the legs. Usually, hunt down live prey.

Falcons are also birds of prey; however, eagles are considered more robust than Falcons. They do not have a stronger Talon that of eagle’s. Their style of catching the prey is by diving near the prey and taking it by surprise. Eagles, on the other side, grab their prey by grabbing it and crushing it with the strong talons it has.

Falcons prey on small birds depending upon their habitat, like doves and pigeons. Eagles, however, have a variety of prey they eye on. This includes fishes, snakes, ground mammals, especially young offspring and other birds.

Eagles have a strong built, and Falcons have a slim body which, when compared to eagles, is very less. Falcons’ wings are pointed.

Falcons’ eyes are either black or dark brown. They are not aggressive compared to eagles. Eagles, on the other hand, have a broad-chested body with round wings, and their eye colors differ. They are very aggressive. Falcons are not.

Falcons have a tomial tooth that Eagles do not have, that is yet another different feature. A tomial tooth is a sharp-triangular shaped ridge that exists on the upper jaw of the bird. Falcon’s beak is strong, but it is not strong enough to crush the bones, so here is where this tooth comes handy.

This tooth is used to injure the prey’s neck and severing the vertebrae, thereby making the prey immobile. Eagles do not have this tooth, and their beaks are enough for them to land with prey and kill it.

The feathers cover the wings of the Falcons, and they have slender wings that are a tad pointed in the end. The wings are wider than the falcon’s bodies.

Eagles have legs also feathered down to the toes. In the case of sea eagles, the legs are feathered only till half the toes.

They have rounded wings, unlike the Falcons. Eagles have a prominent eyebrow-like ridge above its eyes, that is not found in falcons.

Eagles can scavenge even larger prey, due to their size and the body that they have. Falcons owing to their size, do not hunt down larger animals like that of eagles.

Eagles can range from 40cm to 1m in height, making it perhaps the largest birds that there is. Due to this, there are very fewer predators of eagles themselves.

However, this is not the same case when the Eagles are still chicks who do not possess the strength to scavenge prey. The females of a few species are larger than the males at times.

Falcons range from 25cm to not more than 60cm, which makes them comparatively smaller than Eagles. Even though falcons are dominant predators, their power becomes loose in front of eagles, or when they are on the ground.

Wolves and humans are main predators of the falcon when they are on the ground, and even eagles and a few Owls tend to attack Falcons of smaller sizes. 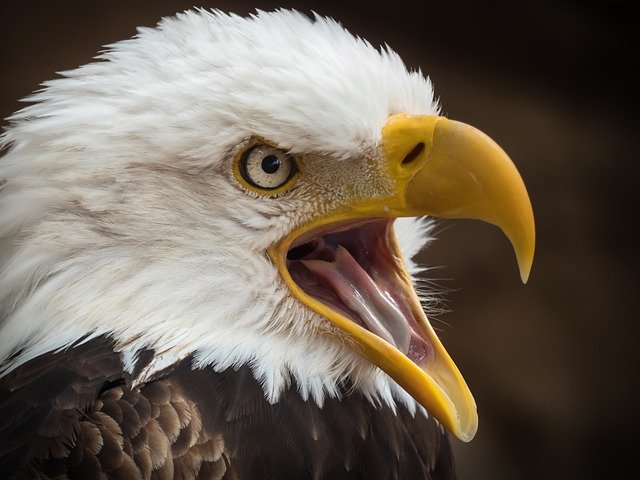 Female eagles build nests called “Eyrie” on trees at a great height or at cliffs to stay safe. The female eagle lays two eggs of whitish color, which takes about a month to hatch.

In many species, one Eagle chick is stronger than the other, thereby making the other chick, a weaker sibling. At times, the stronger sibling even ends up killing the weaker sibling, and the parents do not take any action to stop the killing.

In the case of Falcons, do not usually build their nests. They use the hole of the trees or natural ridges of the cliffs or a man-made structure to lay eggs, making the chicks and eggs, a little susceptible to predators who can reach the nest.

Falcons start to breed when they are one year old. The female lays three to four eggs, of whitish eggs and dark brown markings—the eggs hatch in 28-35 days. The weaker and stronger sibling case existing with Eagles does not exist here.

Falcons are solitary birds; hence they do only come together to mate. Eagles are monogamous, i.e., they mate for life and reuse the same nest after a year for mating.

Eagles have site loyalty and can live in a place throughout their lives until conditions like weather and food availability become a problem. Falcons are solitary birds; hence they either spend time in the same place or migrate up to 15,000 miles per year. Eagles do not migrate.

Special features that set each of them apart 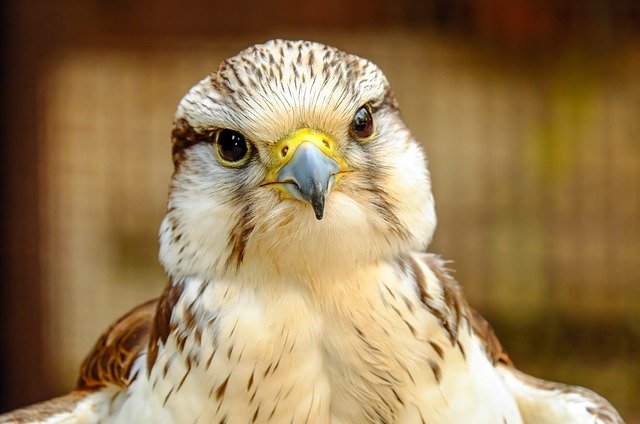 Each of these birds is unique on their own. The eagle eye is one of the strongest eyes that any animal could have. The eyesight of eagle is said to be four to eight times stronger than that of an average human.

It is estimated that the eagle can see a rabbit from a distance of 3.2 km. The muscles in the eyes are so strong that they continuously adjust the eyeballs on the prey until it is killed by the eagle.

The eyeballs have such a sharp focus that despite the Eagle flying, the target is attained. Eagles have the power to identify five distinctly colored squirrels and locate their prey even when it has hidden from the eagle.

The Peregrine Falcon is the fastest animal on Earth when it dives to hunt its prey. The speed at which it dives is over 200miles or approx—390km per hour, which is insanely fast.

This is the reason; the prey gets a surprise when the falcon attempts to hunt it. Its speed is unanticipated by the prey. Even though Eagles are fast, Falcons are faster, especially the Peregrine Falcon that makes Falcons, different birds from the Eagles, despite similar dimensions and looks.

The Bald Eagle and Peregrine Falcon Fight Comparison – Who will win?

Even though there is a lot of type of Eagles, belonging to different groups, the Bald Eagle is a very prominent eagle amongst the gang. The bald eagle is not actually bald but is named bald after its white-feathered head.

They have a brown feathered body and are very swift in attacking their prey, due to the powerful eyes that they have. They are around 3 feet tall and weigh 10 pounds roughly, which makes them a very powerful bird.

The Peregrine Falcon, on the other hand, is around 20 inches tall and weighs 3 pounds. Even though the Bald Eagle has an advantage due to its huge size, the Falcons much faster.

They can take down larger prey, even big birds, due to their speed of attacking and the tomial tooth. When the falcon dives at a speed of 200mph, the prey’s neck is attacked so sudden that it throws the bird out of the sky and kills the animal on the ground.

The answer to who wins it between these two depends entirely on these two birds, but you do get an idea of the difference between the two.