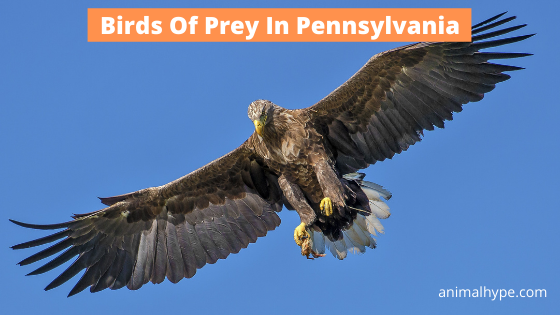 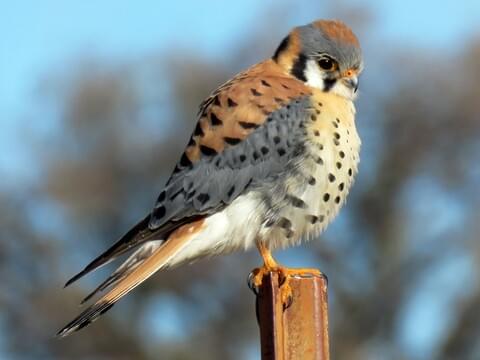 Also known as “sparrow hawk”, the American Kestrels are the smallest and most common falcons in America. These falcons showcase sexual dimorphism in plumage and size. Their plumage is striking and colorful.

They have a rufous-colored back with visible bars. Their diet includes mice, lizards, insects, grasshoppers, etc. The calling sounds of these raptors are “klee or killy”, “whine”, and “chitter”. 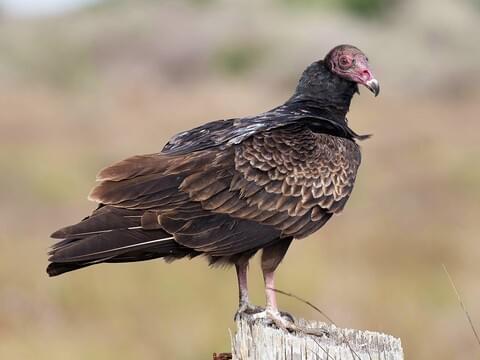 The Turkey Vultures are also known as “John Crow” and “Turkey Buzzard” in the Caribbean and North American regions, respectively. As a scavenger, they mostly consume carrion. The only calling sounds ever heard from these vultures are low hisses or grunts.

They locate their food with the help of their heightened senses of smell and sight. These vultures fly low in order to locate the fumes of dead or decaying flesh.

The Golden Eagles categorize themselves among the best birds of prey in the Northern Hemisphere. With a dark-brown body and golden-brown plumage, these eagles are fast and agile. They catch their prey with their strong feet and sharp-edged talons.

Their diet includes hares, rabbits, ground squirrels, etc. These eagles are held in high regard due to their hunting prowess. Some ancient or tribal groups believe them to be a creature of mysticism. Hence, they are the most researched and studied topic in some parts of the world.

The Bald Eagles are the national bird of the United States of America and also appear on the national seal. They owe their name to the fact that they have a white head. These eagles have sexual dimorphism.

Their beak is unhooked, large in size, and yellow-colored. They are closely related to the American Fish Eagle. These birds are opportunistic hunters that mainly survive on fish. They pick the fish by gently swooping and grabbing them by their talons. 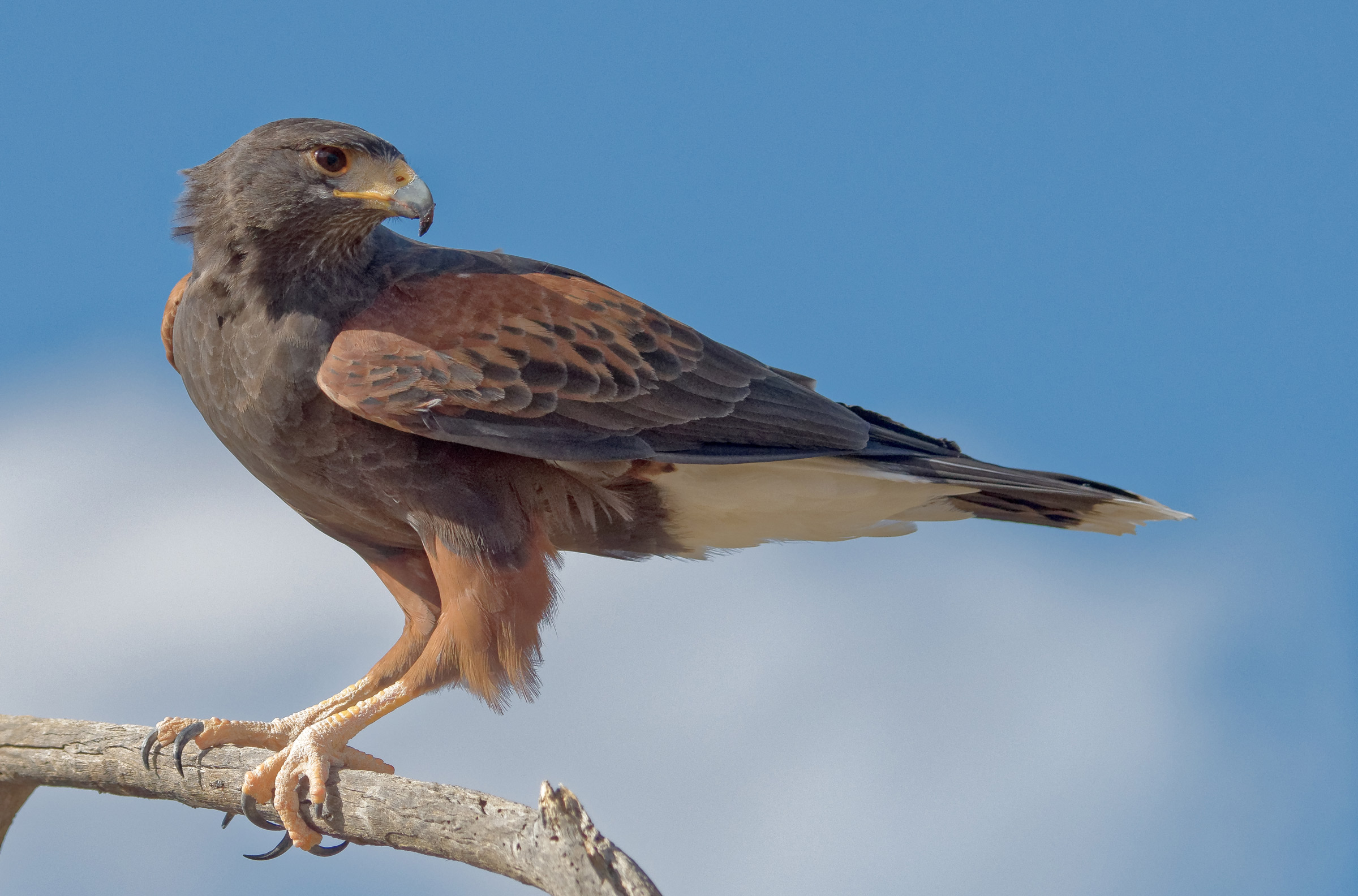 Also known as “Bay-Winged Hawk” or “Dusky Hawk”, Harris’s Hawks are medium to large-sized hawks. These hawks are famous for escaping from captivity.

While the other birds of prey tend to hunt alone, they have a tendency of hunting cooperatively in packs. They are tolerant, social, and intelligent birds. The aforementioned qualities make these birds easy to train and are a reason for their popularity.

The Harris’s Hawks display sexual dimorphism. With a dark-brown plumage and chestnut shoulders, these birds have long and yellow legs. The calling sounds of these raptors are harsh in tone.

Also known as “chickenhawk” in the United States of America, the Red-tailed Hawks have a strong tail. Owing to their name, they have a red-colored tail. The color of their dorsal ranges from white to near-black. They showcase sexual dimorphism in size. Their diet consists mainly of rodents and ground squirrels.

However, they can consume lizards, crabs, and birds as well. Like Harris’s Hawks, these hawks are also easily trained and thus are the most-captured hawks in the United States. 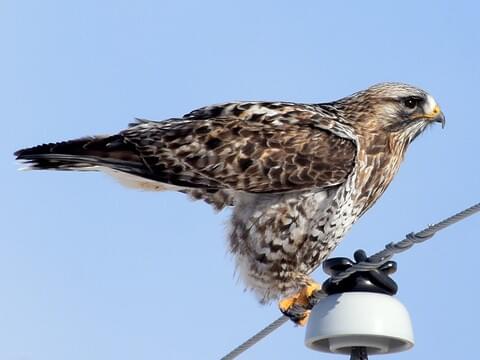 Also known as Rough-legged Buzzard, the Rough-legged Hawks are medium to large-sized birds of prey. They were originally known as the “Rough-legged Falcon”. These hawks tend to hover above their prey like the Ospreys and Kestrels and feed on small mammals like mice, rats, insects, etc.

The plumage of these birds is brown in color with some speckles. Their wings are long, making them appear like an Osprey. They make their nests on cliffs or in trees. Their alarm sound is “kiu wiyuk” or a descending “kee-eer”. While courting, they produce a hissing sound. 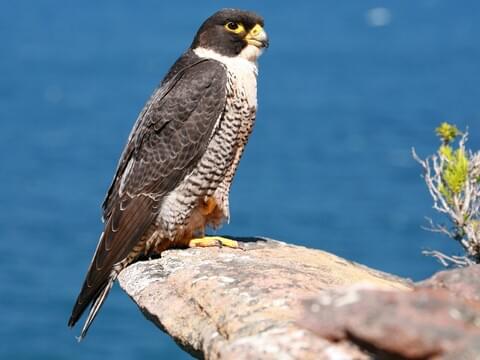 Originally known as the “Duck Hawk”, the Peregrine Flacons are well-known for their high-speed dives and speed. They are the fastest bird in the world as well as the fastest member of the animal family. These birds are sexually dimorphic and primarily eat pigeons and ducks. They can eat small mammals, reptiles, and insects as well.

Also known as “common barn owl”, the Barn Owls have a heart-shaped face. They have brown or grey-colored plumage on their backs and heads. These owls don’t hoot, rather lets out an eerie screech.

The Barn Owls usually mate for life, until the death of one of the partners. These birds are medium in size with a pale to the brown-colored body. They have long wings and a short tail. Their diet includes bats, lizards, amphibians, voles, shrews, plovers, godwits, turnstones, etc. Commonly known as “Northern Barred Owl” or “Hoot Owl”, Barred Owls are large-sized owls. They have a brown to grey-colored body with thick and dark bars around their throats and napes. Their short and yellow beak remarkably stands out from their pale body.

With an exceptionally large head, they lack ear tufts. Owing to their series of eight calling sounds, they are also known as “Old-Eight Hooter”. The usual sound of these nocturnal birds is “ok-ok-ok-ok-ok-buhooh”.

Their calling sounds are termed as empathic, loud, and spectacular. They generally feed on small mammals but can eat fish and reptiles as well. 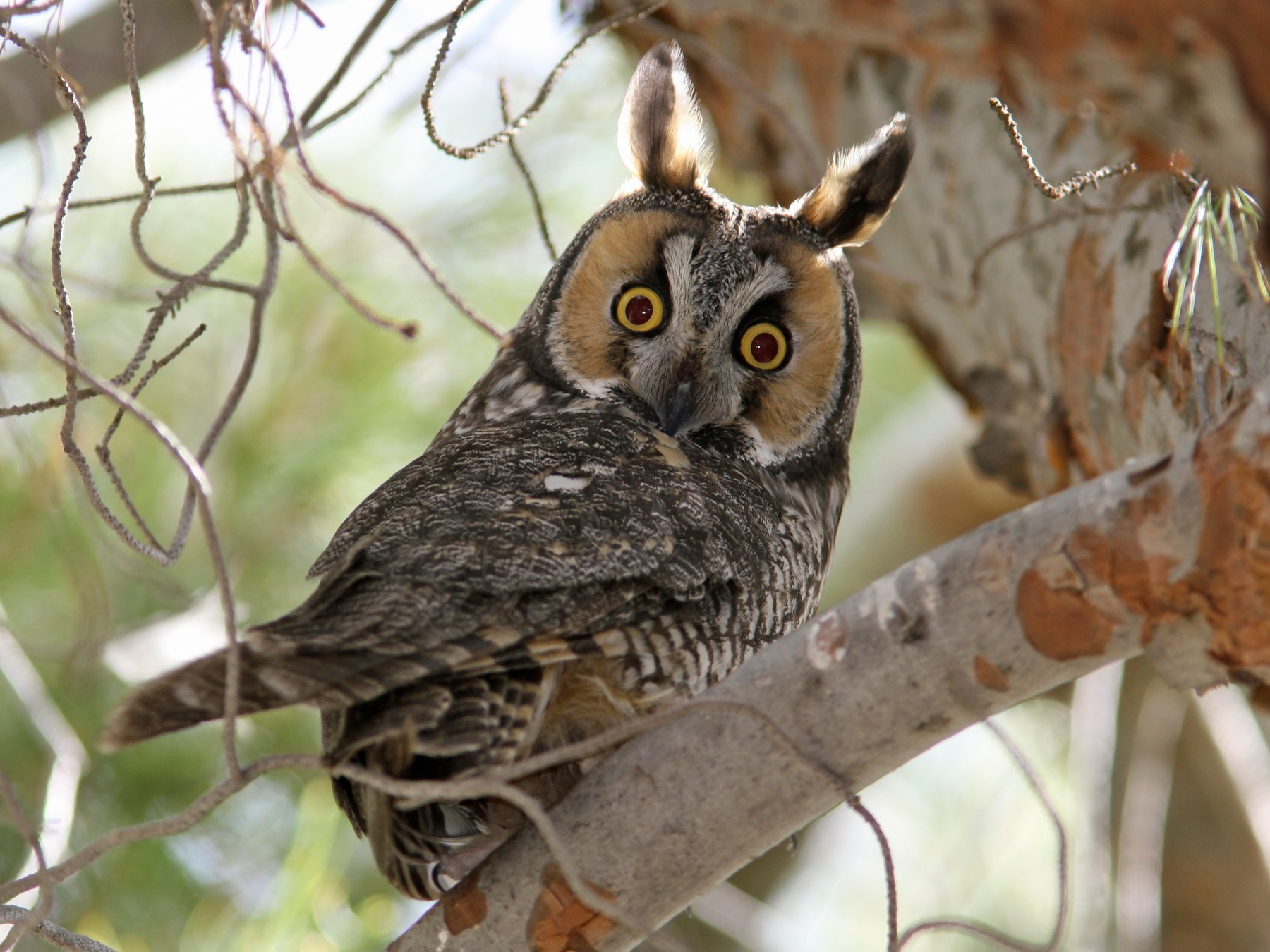 Informally known as “Lesser Horned Owl” or “Cat Owl”, the Long-eared Owls are medium in size. They are good hunters and rely on rodents and voles for their primary diet.

Although they can also insects and birds as well. These birds are partially-migratory, and due to their erratic migratory routes, they are often termed “Nomadic”.

With long wings, these owls have protruding ear tufts that are placed differently than the ear tufts of the other owl species. They display reverse sexual dimorphism. The males have a dull plumage compared to the females. These owls produce a cat-like “jaiow” or high “yip-yip” notes.

They also enjoy hunting large-sized mammals, reptiles, rodents, and birds. These owls are often compared to the Red-Tailed Hawk due to their common prey, areas, and nesting process. Their body is colored for perfect camouflage.

The underparts are light-shaded with brown bars, while the upperparts have a mottled-brown with dark marks. These owls have a facial disc that varies from reddish to greyish in color. Their “horns” are actually feathers, known as plumicorns.

The calling sound of the Great-horned Owls is a loud and low-pitched “ho-ho-hoo-hoo-hoo” that lasts up to 4 or 5 syllables.

The Northern Saw-whet Owls are one of the smallest owls of North-America. They migrate without any fixed pattern. These owls lack sexual dimorphism. They have round and white-colored face with brownish-cream streaks.

Their beak is dark-colored while the eyes are yellow in color. The Northern Saw-whet Owls are similar to the Short-eared Owls, except for their much smaller size.

An interesting feature of these owls is their wings. When placed in front of a UV light, the ventral side of the feathers showcases a neon pink. This phenomenon enables one to determine the molt and age in the adult Northern Saw-whet Owls.

The Eastern-screech Owls are small-sized owls with a large head. With round wings, they have a short and square-shaped tail. Their ear tufts are pointed and elevated. These birds may be grey or rufous in color. They have yellow eyes with almost no neck.

There are two color variations occurring in the Eastern-screech Owls, “the grey morphs” and “the rufous or red morphs”. The grey morphs are better camouflaged against the bark of hardwood trees, while the red morphs are secured in the colorful pine trees. 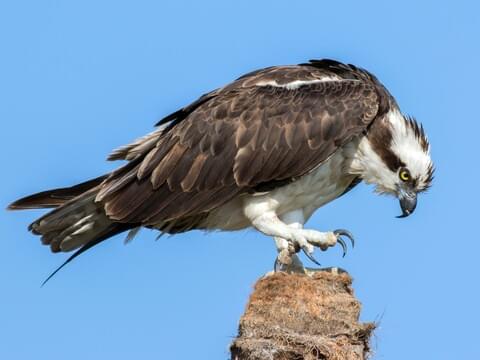 Also known as “sea hawk”, “river hawk”, and “fish hawk”, the Ospreys are diurnal birds of prey. Owing to their other names, they are piscivorous. The fish constitute most of their prey. They can also feed on rodents, rabbits, birds, etc.

The nests of these birds are quite different than the other birds of prey. They make their nest on the coastal areas. Their nest is a large stack of seaweeds, driftwood, sticks, etc. These nests are often built on utility poles, rocky outgrowths, artificial platforms, etc.

Ospreys are non-migratory. The underparts of these birds are white in color, whereas, the upperparts are deep or glossy brown-colored. They have a white head with golden to brown-colored irises. With black-colored bill and talons, they have white feet. The calling sound of these birds of prey is a set of sharp whistles of “cheep-cheep” or “yewk-yewk”.

Fun Fact – A medieval belief goes on that the fishes felt so captivated by the Ospreys that they turned their bellies up in surrender. The Ospreys are referred to as the “King of Birds”, in Buddhism; especially in their tales of “The Jataka”.

Birds of prey found in Pennsylvania (Summing up)

The birds of prey are often imagined to be something scary and vicious. Although, after reading about these scavengers, anyone would be convinced otherwise. Try spotting these strange birds, and you might receive more than you ever asked for.

28 Birds Of Prey Found In California

27 Common Birds Of Prey In Colorado